It was New Years Eve and we were digging through our wine cellar for something special to pair with the Fillet Mignon.  I first dug out a 1999 Sebastiani Cherry Block but then Paul found the 1997 Goosecross AEROS.  The AEROS was the selection for the evening.

Goosecross doesn’t make there AEROS every year.  Only when the it’s a great growing season and harvest. Yes, I have a collection of their AEROS in my wine cellar and I believe now is the time to drink the 1997. If memory serves me correctly, it was 1997 when I joined their wine club after a trip to Napa.   Why did I choose Goosecross?  Because I liked their label and it’s been a keeper!

As the wine was poured into the decanter it showed red brickish color which is an indication of age. 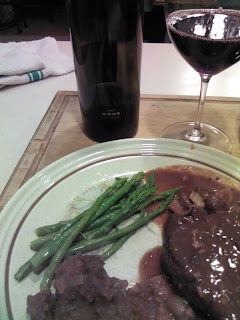 The wine is a food wine and needs to be accompanied with a nice roast beef of fillet mignon.  We paired it with fillet mignon in a red wine and mushroom sauce.

In the glass aromas of smoke, charcoal and tobacco dominated.  Secondary aromas lingering behind were dark berry and black berry.

Lots of oak on the palate.  Blackberry and black cherry fruit showed through.  The wine was silky and soft on the mouth.  A great wine to be paired with our New Years Eve dinner.

If you are lucky enough to have this wine in your cellar, I would make a nice winter meal and pop the cork.  Don’t wait to long to open it.