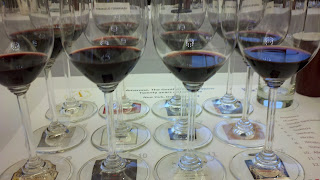 I recently attended the Amarone Families tasting in New York City and was privileged to taste Amarone from 1988 – 2007 with 12 producers.  Of course I preferred the older vintages which were priced at $300.

If you aren’t familiar with Amarone, it’s not a grape but a wine made through the appassimento process and fermented dry. The appassimento process means drying the grapes. When harvested grapes are placed in special slatted boxes, laid on open shelves or hung from ceiling rafters by hooks.  The area is kept well aerated to prevent buildup of humidity.  The grapes are left drying until mid January, by which they have lost as much as 60% of their water through evaporation.

The dried grapes are then brought into the winery and a long, cool fermentation begins.  This fermentation will last anywhere from until March through May.   When fermented to 12% alcohol the wine still has considerable residual sugar.  When produced in that manner it is called recioto.  When fermented completely dry it will have between 15% and 16% alcohol and this is Amarone della Valpolicella. 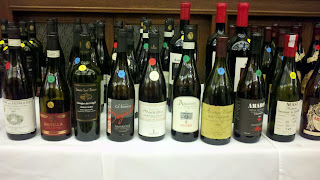 As with all wineries, they all have their story.  They day was very interesting and educational and filled with good wine. One of the major takeaways I learned from this seminar is the aging of Amarone.  These wines age well and for a good 20+ years.  Last Christmas I had purchased a bottle of Zenato Amarone for my husband.  We hadn’t opened it yet, and after this seminar I told him we weren’t opening it for another 10 years.

Here are some brief notes to guide you on your Amarone purchases.

Brigaldara – Amarone della Valpolicella Case Vecie DOC 2007
The winery was established in 1986 and the first year they sold 800 bottles of Amarone. The vines that these grapes grow on were planted between 1990 and 1995, so they are fairly young. Varietals used in this vintage are 40% Corvina, 30% Corvinone, 20% Rondinella and 10% other.  They were harvested in October and crushed in February.  Fermentation lasted 30 days and the wine spend 24 months in new French Oak and 12 months in Slavonian oak.

There was a little resin on the nose along with baked cherry.  The wine was well balanced with a nice finish.  SRP $95

Musella – Amarone Della Valpolicella Riserva DOC 2006
The grapes were harvested in the middle of September and crushed in Jalnuary.  The wine consists of 70% Corvine and Corvinone, 20% Rondinella and 10% Oseleta.  The wine was aged for 4 years in French Oak. Blending was done after fermentation.

The nose had a slight raisin aroma with dried fruit and prune. Very nicely balanced.  SRP $50

The wine had aromas of coffee that lead to a palate of leather and dried cherries.  SRP $70

Begali Amarone della Valpolicella Classico Monte Ca Bianca DOC 2004
Harvested in October and pressed in January this wine is a blend of 40% Corvina 35% Corvinone 20% Rondinella lalnd 5% Oseleta.  Grapes were pressed in January and aged for 40 months in Frenc oak then 8 months in barrel.

This wine was filled with black licorice and pine.

Tedeschi Capitel Mlonte Olmi Amarone Della Valpolicella Classico DOC 2003
This vintage was a treat.  It is only available for special tastings and not released as of yet.  Blend of 30% Corvina 30% Corvinone 30% Rondinella 5% Oseleta and 5% other local varietals.  Selection of the best bunches of grapes were made September 2003, dried and crushed December 1.  The fermentation and maceration lasted 45 days in stainless steel tanks.  Wine was then aged in Slavonian oak barrels for about 2 years in 4 yr old barrels.  The wine aged on clean lees.  Bottle aged for 8 months.

This vintage was very challenging.  2003 was very hot land there was an early harvest.  The wine was dark ruby in color with a nose of black cherry cobbler and hints of licorice and spice.  Very well balanced and smooth on the palate with flavors of chocolate, pepper, black cherry land some balsamic notes. SRP $75

Nicolis “Ambrosan” Amarone della Vallpolicella Classico DOC 2000
This was one of my favorites.  An extraordinary vintage that had a dry winter and warm and sunny spring and excellent growing season.  70% Corvina 20% Rondinella alnd 10% Croatina the grapes were harvested the last 10 days of September, dried and pressed in mid January.  30 months of aging 50% in medium Slavonian oak balrells and 50% in small oak barrels of which 30% were new.

Very complex wine with aromas of  of raisin and chocolate.  Leads to a palate of  ripe fruit, leather, chocolate a strong spice finish that lingers on your palate with hints of white pepper.  SRP $110

Zenato Amarone della Valpolicella Classico Riserva Sergio Zenato DOC 1998
The grapes used in this blend wee 80% Corvina 10% Rondinella 5% Sangiovese 5% Molinara.  At first this wine had aromas of dried we leaves.  I was not that impressed but as the wine opened aromas changed to licorice and chocolate.  Palate was filled iwth dried fruit and spice. This wine is at it’s maximum potential now and through the next two years.

Tommasi Amarone della Valpolicella Classico DOC 1997
Grapes harvested in September and pressed in February the grapes were fermented in stainless steel tanks for 30 days then aged in Slavonian oak barrels for 36 months.  This Amarone is a blend of 50% Corvina 15% Corvinone 30% Rondinella  l5%Molinara.

Soft aromas of raisin lead to a nice balanced and smooth palate with concentrated fruit and elegance.

Allegrini Amarone della Valpolicella Classico DOC 1995
Harvested in October the grapes were dried for 120 days and pressed on January 10.  Aged in oak casks for 36 months, blended then bottled aged for 18 months.

Aromas of black fruit, menthol and licorice. The wine was lightly tannic with complex fruit.  This wine can actually age for a few more years.

Masi Mazzano Amarone della Valpolicella Classico DOC 1990
This Amarone was one of my favorites. Of course the SRP is $300.  The grapes for this Amarone are grown on a hillside vineyard and 1990 was a great growing season.  The wine is a blend of 75% Corvina 20% Rondinella and 5% Molinara.  2% of the Corvina grapes had some Botrytis at harvest.  Harvested the end of September, beginning of Octoberl the grapes were pressed in  January land aged in small Slavonian and Allier oak barrels for 4-5 years.

The color of the wine was a brickish color showing its age.  Aromas of dried prunes and raisin lead to a palate of raisin, dried fruit, prune licorice.

Speri Amarone della Valpolicella Classico Vigneto Monte Sant’urbano DOC 1988
This is another $300 SRP Amarone that was very nice!  Blend in this bottle was 65% Corvina veronese 25% Rondinella l5% Corvinone 5% Molinara and the rest was other indigenous varieties. Grapes were harvested the first few weeks of October land dried for 120 days.  Pressing was complete the end of January 1989. The wine was then aged in 50hl Slavonian oak barrels for 4 years. 10% of those barrels were new.

The wine was a dark almost chocolate in color.  Aromas of earth, truffles and dried fruit filled the glass.  A very complex wine the palate was filled with cherries, dried figs, and hints of licorice and truffles. The finish left a slight almond taste lingering on your palate.