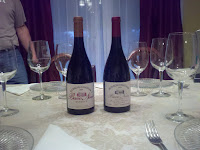 Last week I was invited to Hudson-Chatham Winery to take part in TasteNY which is a tasting event that takes place on Twitter with people in different parts of the country.  It’s a way to introduce people to the wine regions of New York in the comfort of their living room and is founded by Lenn Thompson of The New York Cork Report. 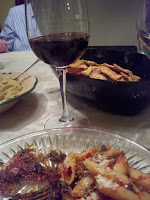 The note I received from Carlo was asking us to come to the winery for pizza and Baco.  We would be tasting the 2009 Casscles Vineyard Baco Noir and the 2009 Old Vines Baco Noir. The same grape, two very distinctively different wines.

Paul and I drove the hour to the winery and it was dark, so we went down to the house where everyone was gathered and the dining room table set.  Dominique decided to make Penne with Sausage instead which was a nice surprise and very good! 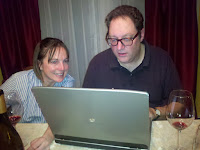 We sat down at the table, David and Carlo with their computers and pasta, me with my cell phone and the event began.  We began with the 2009 Baco Reserve.  The grapes for this wine came from winemaker Steve Casscles vineyard in Athens, NY and was aged in French Oak for 6 months.  I tasted this Baco back in January and it was quite acidic.  I was pleasantly surprised how the acidity had soften up quite a bit in the past few months.  As the wine opened up we got a candied black cherry flavor.

The next Baco is Hudson-Chatham’s Old Vine Baco 2009.  This wine was much more fruit forward than the Reserve, much heavier and bolder. The grapes for this wine come from the Finger Lakes.  Two Baco’s, same grape, different growing regions in New York.  It’s very interesting how different the wine can be based on where the grapes are grown.  When you get down to it, they can be different within the same vineyard.

Recently Carlo had a blog post about the Old Vines and I found it very interesting.   The grapes used in the Old Vine Baco come from The Masson Place Farm.  It is a huge property, and it is really an amalgamation of smaller farms. Pultney Vineyard is the spot where their block of Old Vine Baco is grown.  The vines are gnarly, twisted, and look like old witches hands. But, they produce big, luscious bunches of dark, ripe grapes. They let the grapes hang as late as possible. Almost until they begin to burst. They crush them at a facility in the Finger Lakes and then transport them back to Hudson.  You can read more about Carlo’s Old Vine Baco on his Hudson-Chatham Wine Blog.