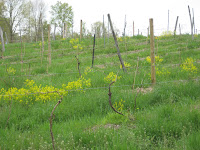 I got asked two weeks ago to help bottle Seyval Blanc at Clinton Vineyards.  I have never participated in a bottling before so I was excited to partake.

Chris (the manager and winemaker) had left me a message the night before and I swear he said to come at 9am instead of the agreed upon 10am.  So I showed up at 9am and was an hour early.  Chris was stressing out so I went for a walk up to the vineyard. 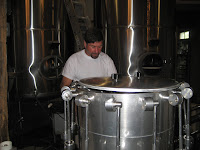 I’ve never walked up to the vineyard area before, so I didn’t realize I would be met with a gate and lock.  I was walking around the vineyard and the barbed wire fence trying to figure out if I could fit through the fence.  I was going to go for it, but a bell went off in my head and I realized the fence had electric going to it.  I touched the fence to see and yup, there was a slight charge.  So no sneaking into the vineyard for me, just the picture at a distance. 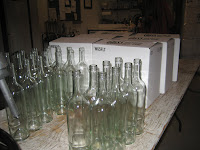 When I returned to the winery it was almost time to get started.  Chris was calibrating the bottling machine, bottles were coming out of the boxes and cork was loaded into the corking machine.

My job for the day was the bottling machine.  Once the bottles were full, I had to take them off and line them up for the lady doing the corking.  I consider myself in decent shape.  I go to the gym, I use the upper body machines as well as the machines that work your legs.  Well I guess the movement of taking bottles off the bottling machine uses different muscles not touched by the machines at the gym.  After 4 hours of bottling my arms were a bit tired and sore. 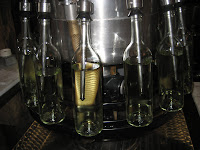 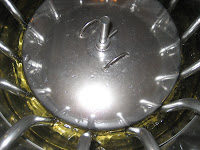 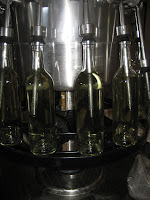 We bottled 400+ cases of Clinton’s 2010 Seyval Blanc.  I did get a small taste, and it was tasting pretty good!  Crisp with green apple and kiwi.  I think it will be released sometime next month.