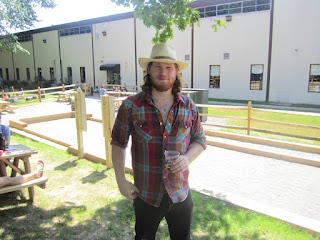 It is hot. Like, 95 and rising, and that stickiness that New York seems to do so well. But by the looks of him, there’s no place Evan Watson would rather be than rocking out on the Captain Lawrence patio–growling through a lineup of southern-tinged bluesy originals, and a handful of out of left field covers.
Watson, and his guitar, has played everything from Jones Beach to those giant Midwestern state fairs to the modern music mecca known as Bonnaroo. But he’s just as happy plying his craft before a few dozen Saturday samplers in Elmsford.
Echoing the old Hollywood cliché about the film star who just wants to direct, this budding rock star simply wants to make beer. “I keep twisting Scott [Vaccaro]’s arm to let me make a brew,” says Evan. “I have an alternative career path that involves fermentation science.”
The annual Pleasantville Music Festival is approaching, and the Evan Watson-Captain Lawrence alliance had its roots in that event, when Evan performed in 2009. An active home brewer, he met a former brewery staffer, Orie Roberts, and the two shared their admiration for each other’s product. “He said, hey–I really like your music,” says Evan, who won’t be playing Pleasantville July 14 due to a prior commitment. “I said, hey–I really like your beer.”
Evan sent owner Scott Vaccaro an email, offering to pitch in around the brewery. Scott took him up on it, and—when his touring schedule allows these days–Evan pours beer in the tasting room, works the door, puts together six packs in the brewing facility—and even spent one forgettable day delivering kegs. “Hardest day of work in my life,” he says with a shake of his shaggy head. “I’ll never do that again.”

For Evan, the spirit among brewery staffers is a throwback to his prior life—when he played outside linebacker for the College of Wooster in his native Indiana. “There are some really wonderful people on staff,” he says. “It’s the locker room camaraderie I’d been missing.”
The music man, who’s 27, grew up “doing very rural things with very rural people,” he says. Citing the likes of Willie Nelson, The Band and Wilco as influences, he messed around with his guitar at open mike nights but, after a friend sent a tape of him performing to a prominent producer, Peter Zizzo, Evan was on his way to New York. His first record, A Town Called Blue, came out in 2009. He has since sold one of his songs, “The Giving Tree”, to Meatloaf, and spent last summer on a bill with Heart and Def Leppard–bringing the average age of the performers down a few decades. Playing full arenas and festivals, where the crowd might number 40,000, Evan says he’d relax pre-show with a Captain’s Reserve Imperial IPA. “Scott sent me quite a bit of beer,” he says.
After three and a half years in Harlem, he has found a new home further up the Hudson, in Dobbs Ferry. Besides carrying out some of the more laborious tasks at the brewery, Evan says he shadows the brewers, getting his fermentation degree on the fly. While Scott has been allowing staffers to brew up their own creations in the new pilot system, such as Scott Tobin’s Cold Cousin Brewski and Chris Rome’s Pallino Pale Ale, Evan keeps hoping the boss will give him a shot too. A few concepts he’s noodling include a nod to his Scottish roots—something peat-y, like Scotch whiskey, flavored with heather tips (which may or may not cause hallucinations, he notes with a sly smile), or a dark pale ale with Belgian chocolate flavor.
The music business, Captain Lawrence’s resident brewbadour says, is hard work. Banging out originals such as the aptly titled “Indiana”, along with a cover of Prince’s “Purple Rain” that sounded particularly good on a steamy day, on guitar, vocals and kick drum is hard work. (Evan got an assist from bassist Chris Anderson on this particular day).
Brewing, in comparison, is a breeze.
“I know how to make beer,” Evan says with a smile. “I’ll be OK.”