Cassis was once the “forbidden wine.” Black currants which is used to make Cassis were once very popular, but in the 20th century the U.S government banned them in almost all of the states. The reason was that black currant shrubs can host and spread a disease, the “white pine blister rust”, which threatened the booming timber industry in the early 1900s.

In 1966, the federal ban on black currants was moved to individual States’ jurisdiction. This led to many savvy states lifting the ban, as did the New York State in 2003 thanks to the efforts of the Currant Company and Greg Quinn. Other states lifting the ban were Oregon, Vermont and Connecticut, whereas others, such as New Hampshire, Massachusetts and Maine did not lift it as of 2007. 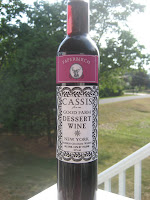 When we think of grape harvest, we think of fall however, black currants are harvested in July.  I recently had a discussion with Carlo DeVito of Hudson-Chatham Winery about Cassis and the production of it.

When do you pick the black currants?  July – we pick by hand.  It’s hard long work.  One field worker can pick maybe two lugs in a day

How much black currants does it take to produce a bottle?  One lug makes about 1/2 a case of 375ML bottles.  Hand harvested, it’s about one day’s picking for every ten cases.  If you buy machine harvested the prices are much lower, and easier but the fruit is sometimes very bruised and some of the juice leaks before you can get it in the tub.  Regardless of how you pick, it takes a lot of fruit and the fruit is about the same size as blueberries, but the grow separately, not in bunches, so they have to be individually picked.

How is the Cassis produced?  We dump it in the tub and crush it by hand. We make it all by hand.  Slowly.  We take twelve weeks.  No brandy is added and we still reach 18% alcohol.   We hand mix everyday, punch down the cap twice a day.

Does Cassis age or is it released within the year it was produced?  You can age Cassis.  It will keep an incredibly long time.  People generally don’t do vintages.

What is so special about Cassis?  Cassis is a wine that has tremendous flavor and tremendous acid.  It punches through chocolate, it sweetens wines, it’s great over ice cream, or a flourless tort. It is fun to sip – it’s beg fresh berries in a glass.

What do you like best about Cassis?  I love that it taste like a bunch of big purple sour dessert wine.  A combination of raspberry and blueberry with a tartness that is both complimentary to the sweetness, but also balances it out.  This is a powerful wine with immense flavor.  I love Cassis because it cuts back against rich food in a heart beat.  A big cheese is again complimented by Cassis. A glass of Cassis and a slice of dry cake or fruit tart is incredible, or just for sipping.