This is my first time participating in #WinePW. It stands for Wine Pairing Weekend and the pairing this weekend is with wines from Brazil. I have to thank Susannah at Vigneto Communications for sending me a bottle of Brazilian wine because after 3 liquor stores and strange looks I came up with no wine.

Wine Pairing Weekend (#WinePW) takes place Saturday, September 14 at 11am ET. I hope you can join us on Twitter as we discover Brazilian Wine and the pairing that go with it. Just follow the hashtag #WinePW

As one harvest ends another begins as the seasons are reversed between the US and Brazil. I’m harvest the last of my cucumbers, peppers and tomatoes and say goodbye to the 2019 growing season as Brazil begins to say hello to their 2020 growing season.

Brazil is the worlds fifth largest country located on the continent of South America. There are 10 countries that share their land borders with Brazil, they are; Bolivia, Argentina, French Guiana, Guyana, Suriname, Paraguay, Uruguay, Venezuela, Colombia and Peru. It is the largest country in Latin America and the fifth largest wine producer in the Southern Hemisphere.

The first vines were brought to Brazil in 1532 by Martim Alfonso de Souza from Portugal. They were planted in the Captaincy of São Vicente but the unfavorable conditions along with a mix of climate and soil were no favorable for the vines. It wasn’t until the Italian immigrant João Batista Orsi came to Brazil in 1824 and got permission of Dom Pedro to cultivate European grapes. He became one of the pioneers in Brazil wine production.

There are approximately 10,000 hectares of Vitis vinifera planted in six main wine regions: Serra Gaúcha, Serra do Sudeste, Campanha, Campos de Cima da Serra, Planalto Catarinense and the Vale do São Francisco in the northeastern part of the country.

This wine is part of the Miolo family thats history dates back to 1897 when Giuseppe Miolo came to Brazil from Italy. He planted his first vineyard in the Vale dos Vinbedos. In 1989 the third generation founded Miolo Winery. Miolo is now the largest wine group in Brazil.

Their philosophy is to make terroir based wines and sparkling wines that highlight each region. The Seivel Estate where this wine is produced is located in the Campanha Meridional region. There are 200 hectares that produce 1.3 million liters.

Alísios meaning trade winds is named after the cool winds that blow from the Atlantic Ocean into their Northeast vineyards. This wine is a blend of 50% Cabernet Sauvignon and 50% Merlot that has spent 12 months in oak barrels. 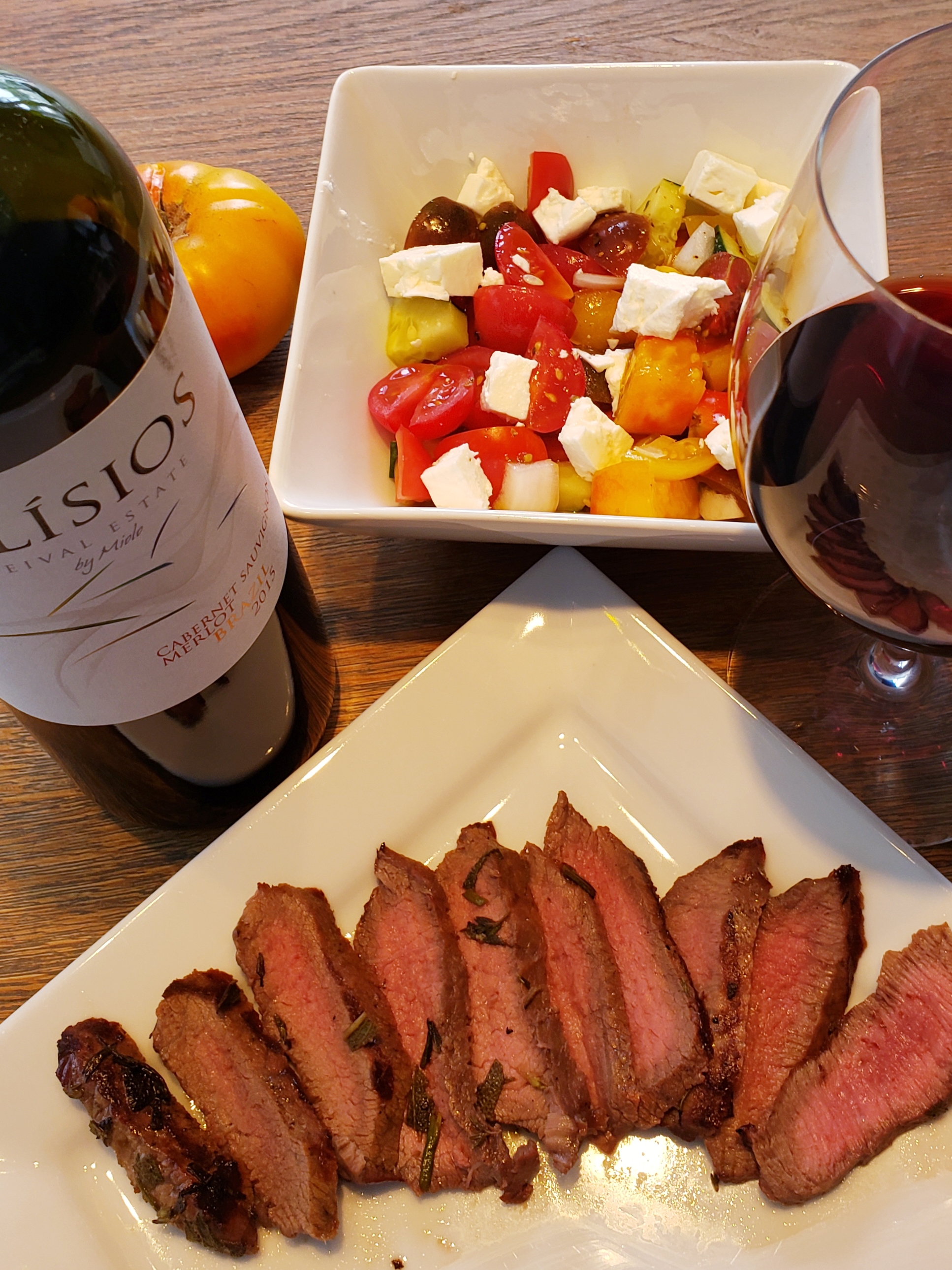 I think of steak when I think of Brazil so I took out a flat iron steak. Since it’s harvest here, I went out to my garden and collect what is left. I made a marinade that consisted of rosemary, sage, thyme, peppers, juice of one lemon and 1/2 cup of olive oil. I let the steak marinade for 24 hours before grilling it. To accompany the steak I made a wonderful tomato salad with some cucumber, onion and feta cheese.

Thank you to Susannah for arranging this months #WinePW and chat. Please visit my other fellow wine bloggers and see their pairings and wine. Join us Saturday September 14, at 11 am ET on twitter.

David of Cooking Chat  will be pairing “Brazilian Beans, Greens and Bacon with Sparkling Wine”