Come Walk With Me April 19

Some of you might know that I lost my mom in August to Pancreatic Cancer.  Never in my wildest dreams did I think she would be taken so early at the age of 74.

Three years ago I lost my dad to Diabetes. Truthfully, I believe it could have been avoided if my dad changed his habits, but tell that to a 77 year old, it isn’t happening. 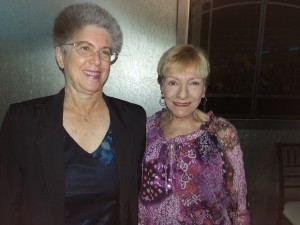 My mom was young and in good health. The picture above taken October 2013.  There was no reason to think we would lose her so soon.  Her mom lived until 96 and her grandparents lived to rip old ages as well.  Cancer was never in the picture.  Heart issues on her side of the family, yes, but cancer no.

Pancreatic Cancer is silent. There are no warning signs until it’s to late.  Mom was told in April her blood/sugar was to high and it was suggested she lose some weight.  Then she told me she was having problems sleeping and issues with her bowel movements.  She hid her weight loss well.

You can see the picture taken in May of 2014. I noticed in June that she had lost weight.  I saw it in her face but didn’t say anything.  She had been to the doctor, but he dismissed her as being depressed and sent her home with Imodium.  It wasn’t until the week before July 4 that she found a mass in her abdomen and went back to the doctor.  He suggest she go to a Gastroenterologist.  The next day she walked into her appointment with the Gastroenterologist and he took one look at her and said “you’re jaundice.”

Three days later she had a procedure to open her bile duck that was closed due to the tumor.  Six weeks later she passed. Although I know I am not an orphan, I sure feel that way.

There is so much we don’t know about Pancreatic Cancer and I am joining in the fight so one day there will be an early detection and it might save you or a loved one. Better yet a cure.

Please join me Sunday April 19, 2015 at Rye Playland for the Westchester Pancreatic Cancer Research Walk.  You can join my team – Team Hudson Valley Wine Goddess (http://2015WestchesterWalk.kintera.org/hudsonvalleywinegoddess) or make a small donation to help in the research. If you would like to walk with us, dogs are welcomed, but need to be on a leash.

Thank you for reading, taking in a personal part of my life. There isn’t enough wine in the world that can bring my mother back, but I do know that she was proud of me.

If I can help someone else detect this deadly cancer early so they won’t have to go through what my family has, I know my efforts have made a difference.