Comedy in the Vineyard 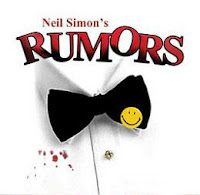 Palaia Vineyards is putting on a Neil Simon play called “Rumors” July 8-11 at 7pm for $10/person on our outside stage under the tent.


They have decided to just do funny plays in addition to their musical in August.  The theater troup performing is called “The Vineyard Comedy Players” and it is made up of some very talented people from theater groups all over the valley.  The troup did another Neil Simon comedy called “California Suite” 2 years ago on their stage that was very well received.


There is nothing better than sitting out under the tent with a view of the vineyard on each side of the stage, drinking a wonderful glass of wine and maybe some popcorn, and enjoying some live theater.  The director is Rich Aufiero, who has produced 24 shows for the Cornwall High School Drama club, and has worked in community theater for many many years.


The play is a farce about 4 couples who come to an anniversary party only to discover there are no servants, the hostess is missing, and the host , who is the deputy Mayor of NYC has shot himself through the earlobe.  Things get complicated when, given everyone’s upper-class status, they decide they need to do everything possible to conceal things from the police and media.


There is a “wine break” between acts of course, to give you time to catch your breath from laughing.  Tickets are on sale now at the winery, or at the door. www.palaiavineyards.com or (845)928-5384.