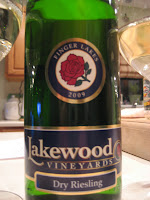 It was 2001 and my first wine tasting trip to the Finger Lakes.  The first winery we stopped at was Lakewood where along with friends had a picnic lunch.

Since then I’ve gotten to know the Stamps from volunteering my time at the NY Wine & Food Classic (wine competition) in August.  I will say their winemaking has improved tremendously since 2001.

This Riesling on the nose was crisp with a hint of home heating oil which is a result of TDN. (to read more about TDN read the NY Cork Report post by Tom Mansell).  There was also hints of citus and orange peel.

On the palate the initial taste was double bubble, bubble gum.  As the wine opened up it became crisp and minerally and had nice apricot undertones.