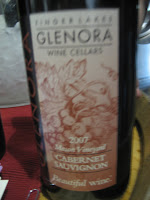 One of the surprise I had at TasteCamp was at the Seneca Lake Wine Tasting at Fox Run Vineyards.  Glenora Wine Cellars was participating and I almost walked by their barrel.  A few years ago – well, like 6 years ago we did a tasting at the winery and had dinner at the restaurant.  We weren’t impressed.  Honestly,  I haven’t tasted their wines since.  Even though I see them at the Hudson Valley Wine Fest, I walk by.  Really an oversight on my part and one should NOT behave like that.  It could have been a bad growing season I tasted 6 years ago.

In any event, I did hesitate for a minute, but thought I needed to give them another try.  Boy was I amazed on how the quality of their wine has improved.

The two wines I tasted were the 2009 Pinot Blanc and 2007 Cabernet Sauvignon  Mason Vineyard.

2009 Pino Blanc had a bouquet of pears with a hint vanilla which was from being barrel fermented.  It was in the oak just enough to give it a nice soft balance.  On the taste was soft pears with citrus mid palate.   This was a nice dry wine with .35% of residual sugar which is not very much. This is a nice summer wine and they only produced 243 cases.

2007 Cabernet Sauvignon, Mason Vineyard – 2007 was the exceptional year for growing grapes and cabernet sauvignon is one of the last varietals to ripen.  There was strong blackcherry on the nose. The wine had a nice balance of tannins with flavors of blackcurrant and blackcherry and hint of vanilla on the finish..