I’m waiting for three men.
They set out from the World Trade Center around 10:45 Friday morning, on bikes, with a stop at the Bronx Ale House and another at the beer wonderland DeCicco’s in Ardsley, before arriving at their ultimate destination: Captain Lawrence Brewing in Elmsford.
They’re running a little late, as tends to happen when enjoying a leisurely bike ride with a few stops for a beer along the way. It’s 5:30 and the tasting room is filling up. The post-work crowd. The Clash’s “Magnificent Seven” plays. 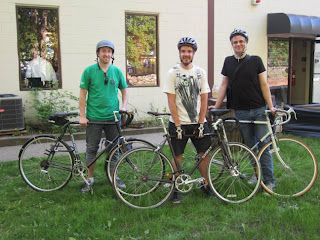 Finally, the men—John Kleinchester, Jeff Quinn and Pat MacGowan–roll up, dropping their bikes in a heap on the lawn.
I expected different. For guys on a 35 mile bike trek, I pictured sinewy fellows in lycra and those wacky cycling tap shoes, sitting atop mega-thousand dollar machines bearing Lance Armstrong’s insignia. Instead, I see three dudes in grubby jeans and t-shirts, riding a trio of rusted old cycles that, frankly, may not even get stolen if left unlocked in Manhattan.
John, Jeff and Pat, all 30, are quickly set up with samples—John and Pat a Kolsch, Jeff a Liquid Gold–and start to talk about their journey. They followed the bike path up Manhattan’s west side and under the George Washington Bridge, rode under the 1/9 train into the Bronx, and ducked into the Bronx Ale House—a pub featuring a fine selection of hard to find craft brews.
From there, it was into Van Cortlandt Park, two blocks from the pub, where the bikers picked up the Old Putnam Trail—the paved over railway line that wends through the expansive park and into Westchester, connecting with another so called “rail trail,” the South County Trailway. After a pit stop at DeCicco’s Family Markets, home of 400 beers, they hopped back on the bike trail, and followed it to just about a mile from the brewery. (Needless to say, use all good common sense when enjoying a beer or two on a bike ride. Especially in traffic.)
Put another way, it was about 34 miles of smooth paths through green space, and about a mile of sharing the road with cars. “It was just beautiful,” says Jeff. “It could not have been easier.” 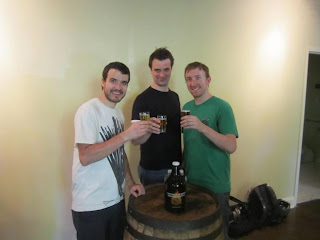 The men differ on exactly when the plan was hatched; John says it was a year ago, while Jeff insists it was more like two weeks ago. Either way, they’d been to the former Pleasantville site, but hadn’t been to Captain Lawrence’s new digs in Elmsford. “I said, when the f— are we going to the new Captain Lawrence?” says Jeff, and the plan was in motion. “I Googled how to get there by bike,” he adds, “and said, what’s this huge-ass trail?”
John and Jeff knew each other as boys in Parsippany, New Jersey. John and Pat went to Ithaca College together. They took a day off work—John is at Viacom, Jeff is an art director at a magazine and Pat studies finance at NYU. (“You don’t work at Merrill Lynch?” asks Jeff. “No,” says Pat. “Did you used to work at Merrill Lynch? Did you get laid off?” “I never worked at Merrill Lynch,” deadpans Pat. That’s why you take these road trips—to get to know your friends better.)
And those bikes, sitting in a tangled clump out front like a sculpture no one commissioned. Pat is on a Panasonic 10-speed. (Yes, Panasonic. No, the bike did not come free with his VCR.) John is on a Trek that’s slightly older than he is, while Jeff rides the deliciously titled Surly Steamroller (yes, it’s a real make) that features—get this—one speed. He rides five miles from Brooklyn to Manhattan, and five miles back, for work each day, so fitness is not an issue.
I ask them for their highlights. Pat says carving through mile after mile of green space on the rail trail. Jeff mentions finding some random park along the way and pulling over for a rest. “We were laying on the grass, knowing we should be at work,” he says. (I think of those “Magnificent Seven” lyrics from moments ago: “Clocks go slow in a place of work/The minutes drag and the hours jerk.”)
John, who runs the popular beer & photos blog Beertography.com, simply knocks on the table holding a fresh round of Freshchester Pale Ales. “That’s what keeps you pedaling,” he says. “Knowing how good the beer is gonna be when you get there.”
The final leg of the journey calls for the men to ride to Tarrytown station and hop Metro-North back to New York. But when it’s sunny and bright, it’s a self-imposed holiday, and the beer tastes good, there’s really and truly no rush to get anywhere.
–Michael Malone (malone5a@yahoo.com)
Captain Lawrence Brewing, at 444 Saw Mill River Road in Elmsford, is open Tuesday through Friday (retail 2-7 p.m., and samples 4-7 p.m.); and Saturday, with retail and samples 12-6 p.m., and brewery tours at 1, 2, 3 and 4 p.m. The author is paid by Captain Lawrence, partially in beer, for “Notes From the Tasting Room.”