How lucky am I that once a year I meet up with my friend Nicholas who works with  Gallo Family Wines and we catch up with our lives, have lunch and wine tasting.  We’ve been meeting up in Pawling, NY at McKinney & Doyle and each year we seem to be seated at the same booth in the back.  Hmm…wonder what they are thinking.

I am in awe of the Gallo brand, their portfolio and it never seems to dissapoint.  Every year Nicholas brings different wines for me to taste.  This year I was presented with three wines from Spain and three from California.  Most of them were moderately priced, as there is always one that will stretch the budget, but it’s worth the stretch!

We begin our tasting in Spain with Las Rocas wines.  Las Rocas Winery is located in the Zaragoza province of Spain about 55 miles outside of Madrid in the Calatayud winegrowing region that became a DO in 1989.  The region has it’s network of tributaries and valleys with it’s own mesoclimate.   Wine has been made here for over 2000 years with Garnacha the most widely planted varietal. 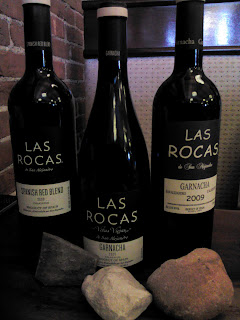 Rocky and nutrient poor soil are the key to Calatayud’s terrior.  That would explain why Nicholas not only shared the wine with me but also pulled out his bag of rocks from the region. Limestone, chalk and slate.  Those rocks play an important part of the terrior as the rocky soil produces smaller more high concentrated grapes with added structure.

First up is the 2009 Garnacha Las Rocas.  Before I even got to taste I was told this was Pinot Noir on steriods.  Wow!  These 30 – 40 year old vines produces a wine with aromas of black cherry, anise and vanilla.  Nice tannins, silky and a hint of white pepper. (I brought this bottle home and had it with Manchego cheese.  The cheese really brought out the cherry in the finish) SRP $14

Onto the old vines – 2009 Grarancha Las Rocas Vinas Viejas (which means old vines).  These grapes come from vines that are between 70 -100 years old.  The berries are smaller and it’s a bigger style of wine as noted just in the aroma from the glass.  The palate was fillled with dark fruit, blackberry and nice acidity and well structured. SRP $20 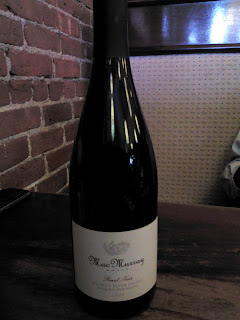 There is always a blend and this blend was a nice representation of the region.  2009 Las Rocas Red Blend is made with approximately 90% Garnacha, the rest Tempranillo and Syrah.  The Tempranilo is added for the tannins and the Syrah for the spice (I love spice!) The aromas on this wine were very berry with hints of oak and coffee.  The palate showed some black fruit along with the berry and nice black pepper on the finish. SRP $14

Now our lunch traveled to California and the Mac Murray Ranch which is all about Pinot Noir.  The 2009 Russian River Valley Winemaker’s Block Selection Pinot Noir I’ll tell you right now this is a high end wine and has the best of the best from the Russian River Valley.  The wine was aged in a combination of new and one year old French oak and spent an additional 6 months in the bottle before being released.  This wine had a beautiful nose of fresh red berry fruit.  The palate was smooth, with baked raspberries, hints of black currant, and vanilla with a finish of coffee. Yes this is worth it for a special ocassion at SRP $60 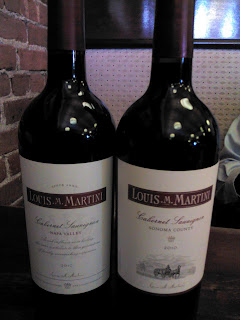 Off to Louis M. Martini where I was presented with two vintages from 2010, one hailing from Napa the other Sonoma. We begin with the more complex of the two, the 2010 Napa Valley Cabernet Sauvignon. 2010 was a cool vintage and after destemming the grapes cold soaked for two-three days.  Aged in a combination of French, American and Hungarian oak for aournd 15 months.  The color of the wine was very dark cherry.  Aromas of my great-grandfather’s cigar box was noted in the glass along with dark fruit of plum and blackberry.  This was bold and complex with a soft finish. SRP $34

The Louis M. Martini 2010 Sonoma County Cabernet Sauvignon is their entry level Cabernet. This only cold soaked for 24 hours, underwent malolactic fermentation and was aged in French oak barrels.  There was a little Petite Sirah added. It had a nice color with dark cherry, plum on the nose that carried over to the palate with some toasted oak and more fruit on the finish. SRP $18 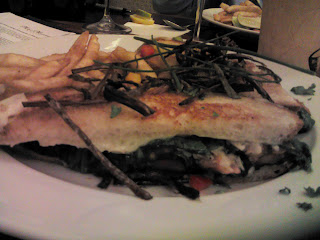 One note – I had the most amazing grilled cheese with sauteed spinach, garlic, olive oil, chopped tomato and montery jack on grilled bakery white. It went well with all the selections and my breath was to die for!