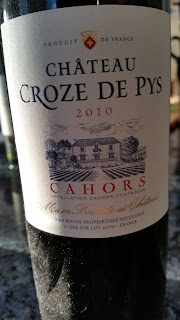 The first thing you think about when you hear the word Malbec these days is Argentina.  Well Malbec dates back some 2,000 years ago when it was known as “The Black Wine of Cahors” that’s Cahors, France.

While Argentina and Cahors Malbec are indeed the same grape, they taste quite different.  That is due in part to the terrior on where it’s grown.  You have to take into consideration the weather, soil, growing season.

The Argentina Malbec has smaller berries in tighter smaller clusters.  This yields a deep color wine with intense black fruity flavors and a nice velvety texture.  The soil structure is that of sand and clay and since in Argentina the growing conditions seem to be sunnier and drier than in France the vines are left to stress and dig deep to soak up the soil’s minerials. The Malbec produced in Argentina will be more fruit forward with black fruit and nuances of milk chocolate and cocoa.

In Cahors France, the region is surrounded by the Atlantic, the Mediterranean and the Pyrenees and the vineyards are along the banks of the Lot River. On the banks of the Lot River the vineyards are terraced.  The vineyards close to the river produce fruitier iwnes, with the mid-level sites producing flesier reds and the upper terraces producing richer grapes that are suitable for aging.  The vines sit on limestone soil rich with alluvial deposits (silt, sand, clay and gravel) from the river and its tributaries.  Malbec grown in the Plateau area where there are temperature swings, the grapes ripen slower creating wines of finesse.  The wines produced in Cahors will be leathery, earthy, black fruit but subtle and possibly having some black spice on the finish.

I recently tasted two Malbecs, one from France and one from Argentina.  Same grape, but very different.

The Malbec from Cahors was a 2010 Chateau Crozes De Pys it had aromas of earth with flavors of plum and dark berry. You will find some notes of leather and maturity. It finishes with a hint of pepper spice. 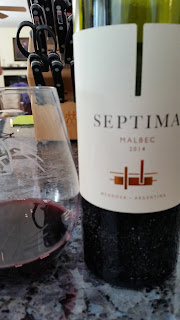 From Argentina I tasted the 2014 Septima Malbec from the Mendoza region of Argentina.  This wine was full of blue and black fruit, blueberry and plum! Very fruit forward.

Both wines run around $14.  If you like a more lively Malbec showing fruit I would suggest the Argentina Malbec.  A more mature, robust Malbec I would suggest one from France.

Let me know what you thoughts are.