The Prosecco Ambassador – Primo Franco and the Nino Franco Brand 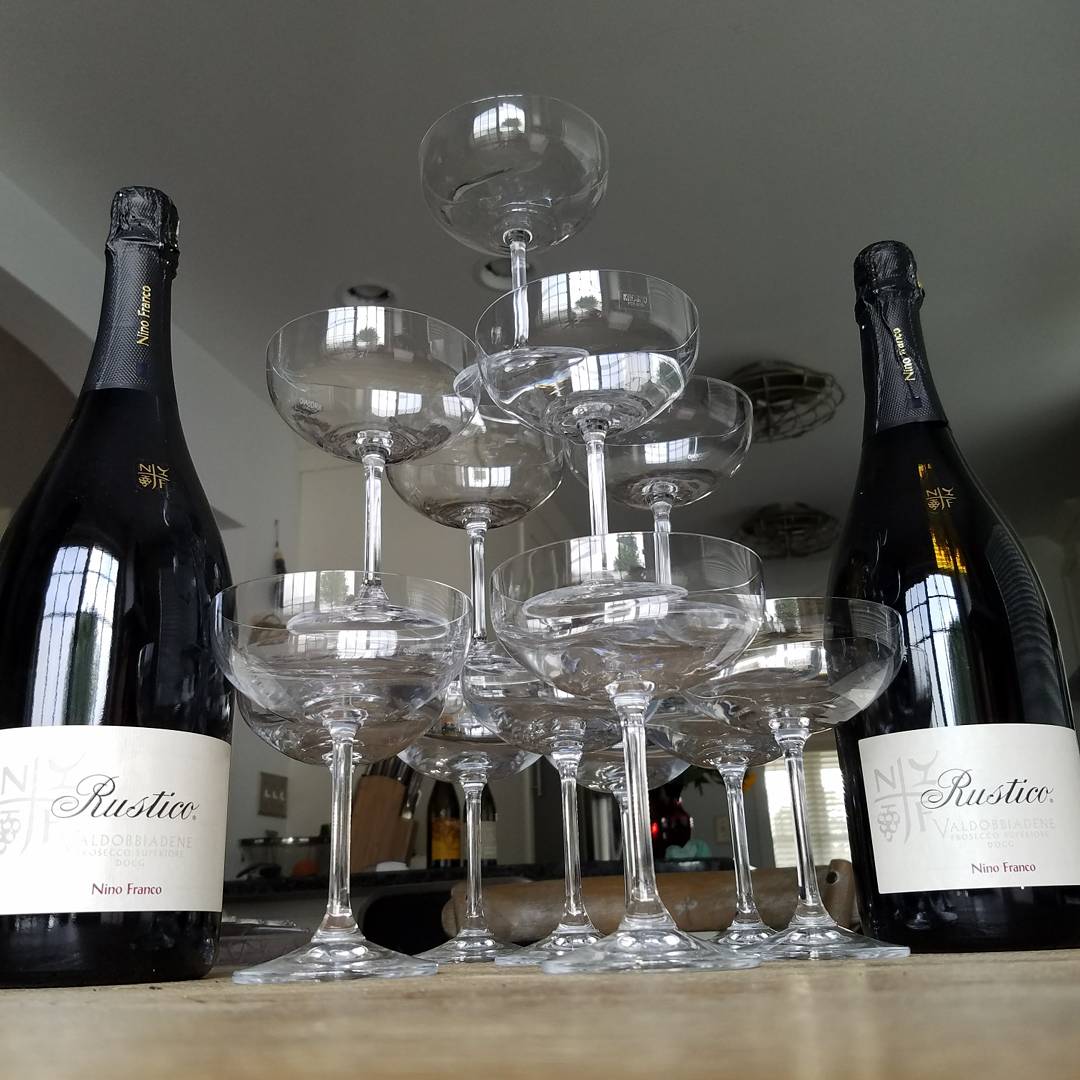 I have to admit, until recently I wasn’t much of a Prosecco fan. I found them at times to sweet and unbalanced and even though they are economically priced, I would skip over the selection and choose another sparkling wine for the occasion. It all comes down to education and tasting. I am so grateful that I am able to participate in a program called #Winestudio and pass along this education to you. (You can also join us on twitter Tuesday at 9pm)

This past month and the month of October it’s all about Prosecco. September was a real eye opener for me and Prosecco. I got introduced to Primo Franco who is the third generation Prosecco producer who spearheaded the Prosecco revolution in the United States. It all began in 1979 on his first trip the the States and he became known as Prosecco’s leading ambassador, responsible the growth of the beverage not just his own brand, but Prosecco as a beverage. Today there is more Prosecco sold throughout the world than Champagne, and the producers have Primo to thank for that.

Prosecco is made with the Glera grape. Just to give you a little layout of the area, there are four regions of Veneto where the Glera grape is grown; Alps, Pre-alpes, valley floor and Venice basin. In August of 2009 Conegliano Valdobbiadene became Italy’s 44th DOCG region. There are only two DOCGs in Veneto, Asolo and Conegliano Valdobbiadene. The main difference between wine with the DOC and the DOCG designation, beside quality is where the grapes are grown. DOC grapes come from the valley floor and DOCG grapes come from the hillside. The hillsides in the Pre-Alps give the perfect climate for growing Glera and making the vines stress. (which is a good thing). The DOC vineyards located on the valley floor are twice the acreage and high yielding.

Nino Franco was founded in Valdobbiadene in 1919 by Antonio Franco. The winery is located in the Prealps region of Veneto. Primo took over the winery in 1982 and that is where things began to change. Previously Primo’s dad and grandfather made several other wines, but when Primo took over that the focus became solely on Prosecco. He saw it had enormous growth potential and began to focus on creating quality Prosecco. Today Primo works with his daughter Silvia with the fifth generation on its way.

Let Primo tell you about his Prosecco. 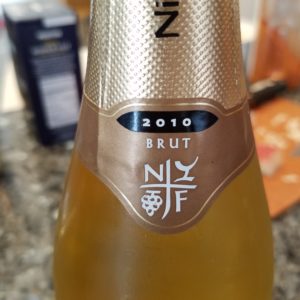 The Nino Franco logo features the Celtic plow and the coupe. I remember my grandmother having a set of the coupe glasses and I was honored that Nino Franco sent me a few to relive the memories I have of the past. If you look at the logo the Celtic plow is the cross-like symbol between the grapes. This is to symbolize how the Celts integrated with the local people in north-eastern Italy. That’s a pretty cool feature and a lot of thought was put into it.

Now lets get into what’s in these bottles and how I think you will enjoy them. 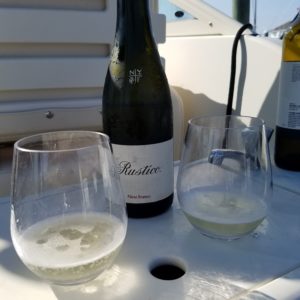 Rustico Valdobbiadene Prosecco Superior DOCG really opened my eyes to what a good Prosecco is. Rustico is a term connected to an old local tradition of making wine using a shorter second fermentation in the bottle and leaving the sediment in the wine. This isn’t practiced today, as the second fermentation takes place in the tank (charmat method) but the brand name stayed. There are 4,000 cases of Rustico produced. This Prosecco was soft and creamy with a nice mousse and aromas of white flowers and apple blossoms. Nicely balanced, you can taste the salinity along with hints of apple and pears. Overall enjoyment. The went very well with Caprese salad and to celebrate new beginnings. SRP $19 (but it was on sale at Stew Leonard’s on Rt. 17 in Paramus for $14.98) 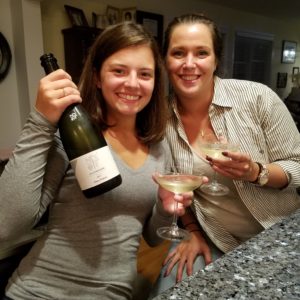 Brut Valdobbiadene Prosecco Superior DOCG This Prosecco even though it’s Brut seems a tad bit sweeter to me than the Rustico. With that being said, it had a hint of biscuit aromas but was crisp with hints of citrus fruits like grapefuit and lemon. The taste was elegant with a little tart apple and pear, smooth and light. SRP $27 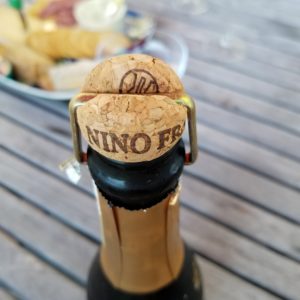 Primo Franco Valdobbiadene Prosecco Superiore DOCG 2016 This is the first Prosecco that Primo made after taking over from his dad in 1983. When we unfoiled the bottle we found it had a closure we were unfamiliar with. The bar is calld an “Agraffe” which was traditionally used in Champagne for the second fermentation in the bottle. We didn’t watch this video of Tim Clark opening the bottle, but we did get it off the same way. If you find yourself with this type of closure on a bottle click here for a demonstration on how to open the bottle without injuring yourself. 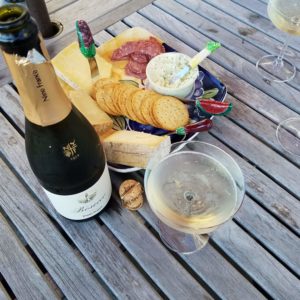 I tried this wine in both the coupe and a Riedel Champagne glass (more like a white wine glass) and the Riedel glass expressed more aromatics than the coupe. I felt the same on the sip, that the Riedel glass allowed more flavors to be expressed than the coupe, but the coupe is history. The selection of the grapes used in the Primo is more strict than the other two and quite small production. They are focused on the hillsides of Valobiaddene where the best quality comes from.Beautiful light straw in color with aromatics expressed from the glass of white flowers, tart apple leading to a smooth rich in fruit flavors on the palate. Peach, kumquat and pineapple flavors stood out as its richness and elegance danced in my mouth. This went really well with a local Hudson Valley Farmers Cheese with garlic and basil. It toned down the basil and blended together nicely with a hint of sweetness. SRP $29 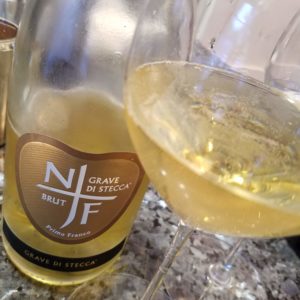 Nino Franco Grave di Stecca Brut Sparkling 2010 This Prosecco was a real treat! First off it was vintage 2010 and I didn’t realize Processo has aging ability and am told this bottle has aging potential for another five years.. The grapes for this Processo come from an acient origin vineyards named ‘Grave di Stecca’ that they own whichlocated on the slopes of the Prealpi, close to the center of town. It’s a closed walled vineyard with limestone soil. What makes this special besides the vineyard is it ages 6 months on the lees and and after the second fermentation in the tank, another one and a half years in the bottle before it is released. Beautiful golden in color with fine tight bubbles expressing toffee, fresh limestone, pineapple and green apple. The palate is soft with a creamy feel and richness. Very complex with many hints of almond, pineapple, peach, pear and green apple. I went out on a limb and paired this with lamb chops and sage potatoes au gratin and it worked. SRP $49

A recap of the month!