Beers That Defy Description
Enjoying a beer is easy. Describing exactly whyyou enjoy it? Not so much. Sure, it’s good, and it’s bubbly, and it’s a pleasant color. But what does it taste like?
Those stuffy wine reviews, with their “oaky” and “jammy” and “gamey,” show just how ridiculous descriptions of potent potables can get. Reviews for cigars (“earthy,” “toasty”) and scotch (“tastes like an old leather boot”) aren’t much better.
The guys at the brewery admit that, even as professionals, it’s tough coming up with meaningful descriptions for the beers. So we asked the good, creative folks in the tasting room to pitch in on this front. There are no wrong answers, they were told. Just have a sip, and spit out the first descriptive words that come to mind.
It’s a cloudless Friday and the mood in the Captain Lawrence tasting room is, as usual, upbeat. There’s a hulking man in a kilt, a handsome black lab, and some sunburned Yankee fans riding high after an Opening Day shutout at the Stadium. The Allman Brothers are on the stereo. There’s Captain’s Kolsch and Imperial IPA and Liquid Gold, among others, on tap. Vinnie Crodelle and Kurt Gabel are fresh off a day’s work for the Department of Environmental Protection in Valhalla. Crodelle clearly has a knack for slinging it around, describing his Freshchester Pale Ale as an “austere and sinister explosion,” leading to a feeling of “general well being.”
Gabel laughs—he too is experiencing the general well being—before toning it down a few notches. His Kolsch is “crisp–like a nice fall afternoon.” 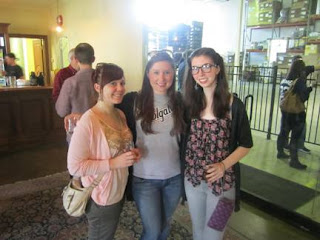 Nearby, Sophia Ressler of White Plains sounds as though she’s auditioning for a DEP job with Vinnie and Kurt, tapping an array of flora and fauna for adjectives. Her Liquid Gold is “piney and citrusy,” with a “definite hops taste.” (Not bad—this very site goes environmental as well in describing the Gold: “Aromas of orange, spice, and green grass.”)
To Ressler, the Liquid Gold–a mix of German malts and American hops–is a “spring walk in the woods.”
Speaking of heady German-American mixes, Zoltan Gall says the Captain’s Kolsch is the only American beer he’ll drink. (Before settling in Pleasantville, Gall lived in Hungary, Cologne and Transylvania. “At midnight, my fangs start to come out,” he says of his time in the latter.) A recently retired research scientist (“Not beer,” he laments), Gall quaffs his beloved Kolsch and ruminates.
“It has body,” the stone-faced sipper says. “It is as bitter as I like it. Very refreshing. A clean aftertaste that cleanses your palate.”
His son, an aspiring lawyer named Ian Sebastian, shakes his head and smiles. “The fact that he likes an American beer, period,” says Ian. “It’s surprising.”
Ian samples an Imperial Pale Ale (“Intense,” he says. The Captain Lawrence site says “citrus and pine,” with “some hoppy bitterness.”) His law school pal Ryan Nolan–no relation to Nolan Ryan, if you’re scoring at home–has just walked in, and Ian says Ryan is as savvy a beer connoisseur as one might hope to meet.
Yet pressed for some winning adjectives to describe his Liquid Gold, Ryan, visiting from Rye, fairly freezes up.
Moments later, he paints a picture like his inverted namesake painting the outside corner of the plate. “Yeasty, a little floral, a little tingly,” he says. “Some spice on the back of the throat.”
At another barrel, Michelle Tuzzio and Art Bartosch, easily the best dressed couple in the tasting room, enjoy their glasses of Kolsch. Michelle, of West Milford, New Jersey, offers up “freshness.” Art, from Yorktown, does her one…two…three… better. “The beginning of the weekend, how better to start off than with a fresh, cold tantalizing beer that stimulates the palate and gets the endorphins rocking and rolling. Gears you up for the weekend, makes you look forward to the next glass.”
Michelle laughs. Art catches his breath.
OK, maybe the Kolsch-loving Transylvanian had it right.
“A great beer, you love it, you enjoy it,” says Zoltan. “You don’t describe it.”
Captain Lawrence is open Tuesday through Friday (retail 2-7 p.m., and samples 4-7 p.m.); and Saturdays, with retail and samples 12-6 p.m., and brewery tours at 1, 2 and 3 p.m. The author is paid, partially in beer, by Captain Lawrence for “Notes From the Tasting Room.”