Cinco de Derby
If ever a day was created to lift a few festive libations with friends, it may just have been May 5. A quick translation of the date into Spanish reveals, yes, Cinco de Mayo, and it happened to be the 138th running of the Kentucky Derby as well. The Derby is known, of course, for the wearing of more preposterous bonnets than a royal wedding, and the quaffing of mint juleps. Headwear is optional for Cinco de Mayo, though some opt for sombreros, and the beverages of choice include Mexican beer or tequila. 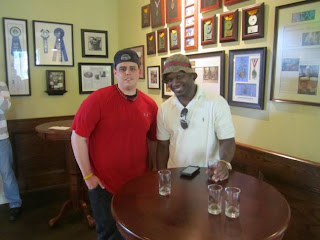 Yet both events elicit a hearty ho-hum at the Captain Lawrence tasting room on this day. Ben Eggleston of Elmsford suggests the Derby’s tagline may as well be Run For the Poses. “It’s a women’s hat holiday,” he says. “Women trying to outdo each other with hats—I have no interest.”
It is worth noting that Eggleston happens to be sporting one of the finer chapeaus in the room, a stylish Burberry number perched rakishly atop his head. He sips the Brown Ale with pal Nick McCullough of Greenwich.
“I didn’t even know the Derby was today,” admits Nick.
Cut the man some slack—Nick’s an investment banker, and says he hasn’t had a free Saturday in some time. He looks like a man paroled.
Across the room, Cliff Galvin of Ossining says he may hoist a Corona or tequila later on at a comedy club. It sounds as though he’d rather sip Captain Lawrence in the tasting room—or at home. See, Galvin, who owns his own construction business, built a bar in what he calls an “extreme man cave” back home, and always has a keg of something Captain Lawrence on tap. (It’s currently a Freshchester Pale Ale.)
That of course prompts one to wonder why he schleps to the tasting room. “I come here to hang out with friends,” he says, nodding to Lauren Dykstra of Ossining and Danielle Noto of Deer Park, Long Island as they sip the Liquid Gold. “I like to see who I might run into.” 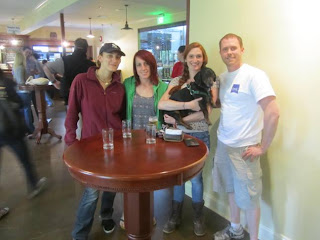 Galvin’s man cave sounds sweet, but across the room, Mike Dalleva, Martha Singerand their schnoodle—yes, schnoodle—Coco, see his tap and raise him two. The couple have no less than three Captain Lawrence lines on the kegerator at their Pomona home: Typically Liquid Gold for Mike, Imperial IPA for Martha, and a wild card.
“When you have people over, you need a light, a dark and something else,” says Martha.
They’ve crossed the Hudson to check out the newly bloomed peonies at Rockefeller State Park, and pop into the brewery. The three taps make for great entertaining, says Mike, even though the grown-ups usually affix themselves to the basement bar while the kids run amuck in the street.
The Clash’s “London’s Burning” fills the room. The Derby is still a few hours away, but over in London, Chelsea has defeated Liverpool for the FA Cup.
Back in Elmsford, wee Sean Mackiewicz, a three-year-old out of Tarrytown, is bouncing around like a young Beckham—still showing plenty of energy after a birthday party up the road at Sportime USA. After the kids romped around in the ball pit, took a spin on the Himalaya and traded their game tickets for loot, Sean’s parents, Ken and Keri, pulled rank and steered the family over to 444 Saw Mill River Road.
Keri holds three-month-old Ryan while Ken keeps a casual eye on Sean. “It was the convenience factor,” says Ken. “Also, we had to fill up our growler.”
They opt for the Liquid Gold; the Belgian-style ale seems to be as popular a pick today as Bodemeister down at Churchill Downs.
Meanwhile, Cliff Galvin—he of the extreme man cave—was correct about wondering who he might run into in the tasting room. His friend Erin Coats, a redhead out of Stamford, bounds in with her dashing dachsund Bandit.
Bandit eyes the schnoodle from across the room as Erin grabs a sample and catches up with her pals.
Finally, someone is doing something Cinco or Derby related: Erin will be heading over to a Derby party in Greenwich later on. But first, she’s catching up with Cliff, Lauren and Danielle—and filling up a growler.
“Everyone else will be sipping mint juleps,” she says with a smile. “I’ll be drinking Captain Lawrence.”
When that marquee race finally unfolded, a longshot horse fitting of such a festive day grabbed the glory. Indeed, could anyone but I’ll Have Another really have won?
–Michael Malone (malone5a@yahoo.com)
Captain Lawrence Brewing, at 444 Saw Mill River Road in Elmsford, is open Tuesday through Friday (retail 2-7 p.m., and samples 4-7 p.m.); and Saturday, with retail and samples 12-6 p.m., and brewery tours at 1, 2 and 3 p.m. The author is paid by Captain Lawrence, partially in beer, for “Notes From the Tasting Room.”