Notes From the Captain Lawrence Tasting Room, Vol. 26 What to Take When Heading Into Labor

It was summer’s last hurrah—a chance to head out of town, hit the beach, visit friends, and partake in other typical Labor Day activities. And any time there’s a holiday weekend in the offing, the growler line at Captain Lawrence Brewing can resemble rush hour traffic approaching the Tappan Zee.
So where were these growlers heading? Which sun-soaked hotspots would the portly vessels add their 64-plus ounces of foamy charm to? We happened by the tasting room Friday at 5—prime growler filling time, we figured–to find out.

Dan Gruskin, Brian Fridkin and Max Gulian, all of Ossining, were filling up an Imperial IPA (Dan), Liquid Gold (Brian) and Ginger Man and Captain’s Kolsch (Max). Were their growlers ticketed for East Hampton? LBI? Jones Beach?
Actually, another waterfront locale: Ossining.
“We’re sticking around Westchester,” said Dan. “We’re hanging out with friends. We’ll have no problem finishing these off tonight.”
Those friends, Dan added, include a turtle named Biggie Smalls.
Paradoxically, there was a scant line for growler fill-ups, while the samples queue snaked through the center of the tasting room.
Susan and Chris DiGregorio of Somers were perhaps the only ones filling up on the house; the pair was part of the winning team at the brewery’s Thursday Night Trivia, this one focused on Game of Thrones, and each member received a gift card for three growler fills. The team also won for best team name, scoring with “Is Your Name Winter, Cuz You’ll…” well, it’s slightly off color, and if you don’t watch the show, it won’t make sense anyway.
Surely the DiGregorios were celebrating their big win with a road trip of some sort?
“We’re having friends over,” said Susan. They were filling up on Pumpkin Ale for the friends on Friday, while saving the Six N’ Change black IPA for the rest of the weekend.
“That one’s for me,” said Chris.
They’re not beach people, noted Susan. But they like trivia in a raucous tasting room. “It’s a really great Trivia Night,” she said of the Captain Lawrence Thursday throw-down. “We’ll probably do it again.”
Was anyone heading out of town for Labor Day weekend?  Who were these people supposedly jamming our highways, bridges and tunnels, and keeping our traffic reporters hopping?

At least Ian Murphy was heading out of state—all the way to Greenwich, Connecticut, that is. Ian’s pal Hal Lenz, an Arkansas man stationed at Fort Bragg with the 82nd Airborne, was in town, and had never visited a brewery. They were stocking up, along with Ian’s dad Bill and his friend Thorsten Ruelle, for a party back in Greenwich. They had the Brown Ale, Freshchester Pale Ale, the new Summer Sipper cream ale, and the Imperial IPA.
“There’s a party tonight,” said Thorsten. “Captain Lawrence is a special treat for our guests.”
Bill Murphy spied an easy dig at his friend. “People only come because you say you have Captain Lawrence,” he said to Thorsten with a sly smile. “It’s not his company. It’s his Captain Lawrence…and his wife.”
One growler—likely the Captain’s Reserve Imperial—will end up at the base in North Carolina. “I’d like to bring multiple ones back,” said Hal.
No disrespect to the Nutmeg State, but it appeared no one was heading out of town for the weekend. 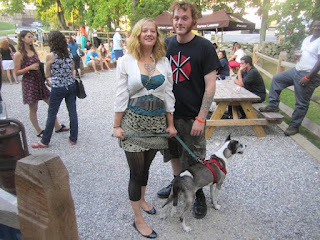 Ah, but there were Raquel Spitzer and Jeremy Cox of Dobbs Ferry, stars of the recent Guns N’ Roses-themed “Notes From the Tasting Room,” with rescue dog Lady in tow. Despite the pair’s non-traditional appearance—the tats, the jackboots—they had the most traditional Labor Day weekend plans I’d heard all evening: heading up near Amherst, Massachusetts to visit Raquel’s dad. As Jeremy headed inside to fill up the growlers, Raquel whipped out her phone to display a photo of her dad. Yet smiling at me from her phone was none other than Bill Murray, circa “Lost in Translation.”
Talk about your Life Aquatic—there would be canoeing involved, said Raquel, along the Connecticut River.
Growlers on the boat?
Raquel shrugged.
“They’re not motorized,” she said with a smile. “And we won’t take the dog.”

Captain Lawrence Brewing, at 444 Saw Mill River Road in Elmsford, is open Tuesday through Friday (retail 2-7 p.m., samples 4-7 p.m.); and Saturday, with retail and samples 12-6 p.m., and brewery tours on the hour, starting at 1. The author is paid by Captain Lawrence, partially in Imperial IPA, for “Notes From the Tasting Room.”