There was, of course, a tornado warning in Westchester over the weekend, and a pair of twisters actually tore through parts of Queens and Brooklyn. (Did someone say Brooklyn Cyclones?) But if that dire forecast put a fright into some people in the region, plenty of others braved the frightful forecast to sample beer at Captain Lawrence on Saturday.
It’s a full-on family affair for Samantha Frawley, a Manhattan resident visiting her folks in Mt. Kisco, as she sips the Pumpkin Ale with her brother, Kenny Johnson. Her dad, husband and brother in law occupy a nearby table, while Mom is taking the tour of the brewery.
“We had plans and we stuck with them,” says Kenny. “We’d always planned to do this.”
The agenda started with breakfast Bloody Marys, says Samantha, and may yet conclude with a wine tasting. “It’s just a regular Saturday,” she says with a shrug.
The Pumpkin Ale, amber in hue and brewed with lots and lots of pureed pumpkins, is going down smoothly. “I’m not normally a pumpkin ale guy,” says Kenny, “but this is good.”

Eddie October and Stanley Oscar, trekking in from Connecticut, waited until the initial tornado warning ended at 12:30 before setting out, and were blissfully unaware of a subsequent warning lasting much of the afternoon. Traffic on the Merritt was nightmarish, but they stuck it out.
Eddie is enjoying the new Beezerker Heather Ale, Evan Watson’s “Ode to Scotland” that’s peat-smoked with local bee archetype honey and dry hopped with heather flowers. “I want to ask him how he got the smoky flavor,” says Eddie.
Stanley sips the Last Minute Alt-eration, another pilot brew and a German-style Altbier, while pal John Ormond of Rye enjoys the Liquid Gold. Like Samantha and Kenny, they weren’t about to let a little extreme weather foul up a fun day.
“We made plans to come here,” says Eddie, “and we stuck with it.”
(Honestly, would you expect anything less than steely resolve from a man named Mr. October?)
Perhaps owing to the freaky forecast, there’s plenty of space in the tasting room, and minimal lines for samples. The house music is on low. There’s no shortage of “Hurricane” songs in the world, thanks to the likes of Neil Young, Bob Dylan and, lest we forget, the Scorpions. But tornado tunes? Not so much. And that’s too bad, seeing how many things rhyme with “twister”. (Blister? Dissed her? Wait a minute, Mister, I didn’t even kiss her?)

People are slowly making their way to the patio amidst the stop-and-start downpours. A rarity for a Saturday afternoon, no one is playing bocce—though a couple little blond kids are having a ball rollicking about the court as Mom and Dad unwind over a craft brew.
While the weather may have kept some away, it’s actually steered others to the brewery. Chris Jones and Maggie Ohmstedt of Dobbs Ferry had planned to hike Breakneck Ridge up in Cold Spring, but the weather fouled up those plans. So they ventured over to the old Captain Lawrence site in Pleasantville—only to learn the place had been vacated several months ago. Fortunately, they found the new space in Elmsford.
“We thought we’d hike, but then figured we’d seek shelter here,” says Maggie.
Chris is a past resident of craft brew meccas including Boulder and Brooklyn; he knows good beer. They started with the Kolsch before Maggie went with the Pale Ale, and Chris the Liquid Gold. Next up on the roster: Imperial IPA.
“We’re working our way through each one,” says Chris. 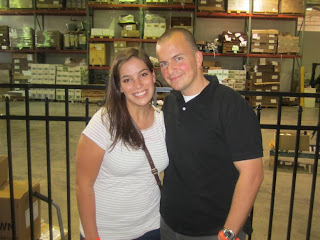 Mike Gaon drove through the storm in Brooklyn to meet Eve Stasinsky of Cortlandt Manor, and her sister. It’s hardly the first wacky weather they’ve encountered while visiting the brewery; they were at Captain Lawrence when that pre-Halloween blizzard dropped 10 inches last year. “We’ve braved all sorts of weather to get here,” says Eve.
Steven DeRosa, who did a reading from his Writing With Hitchcock book at the brewery earlier this summer, is quaffing a few samples with his pug Bogey by his side. When a guy studies Hitchcock films for a living, you’ve got to work pretty hard to put a scare in him.
Steven looks around the lively tasting room and smiles. “I couldn’t think of a better place to be,” he says, “during a tornado.”