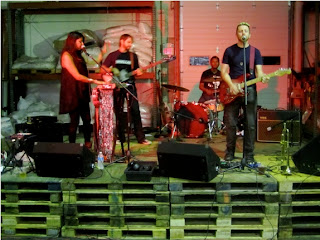 Some artists create from palettes, as those tablets used for mixing paints are known, while others work off pallets, as those forklift-friendly wooden skids used for carting around kegs, bags of barley, and other heavy loads are called. Around 60 pallets were stacked together to make a stage at Captain Lawrence Brewing Friday night, as the Brooklyn-based indie band My Pet Dragon stepped upon it to deliver two lively sets that mixed the avant-garde with plain old garage rock.
“This is the coolest gig we’ve played in a while, because there’s beer…right there,” said singer/guitarist Todd Michaelsen, in a vaguely Beavis and Butthead-ian patois, as he looked out at the giant silver brewing silos on the horizon. “Lots of beer.”
My Pet Dragon was the latest act in the monthly All Things Next concert series, hosted by radio personality Chris Bro. Like the brewery itself, the series recently moved from Pleasantville to its new home at 444 Saw Mill River Road. Funds from the gig went to the Sept. 11 foundation Tuesday’s Children. 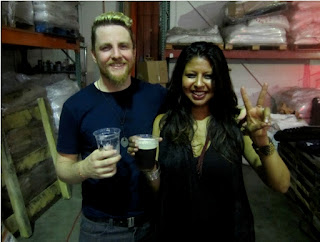 The band paired straightforward indie rock chords, which resonated resplendently around the brewery, with some quirky touches, such as keyboardist Reenah Shah’s at times mesmerizing interpretive dance moves. It was the band’s first brewery gig, though they were pleased to share that they’d played the Breckenridge Beer Festival over the summer.
The Dragons said they were happily surprised to pull off Rte. 9A, amidst a seemingly ho-hum industrial landscape, and find a brewery hiding out back. “I like how it was just kind of tucked away,” said Reenah.
Drummer Raj Maddela is the beer connoisseur out of the foursome. Raj said he discovered Captain Lawrence’s Liquid Gold at the Brooklyn barbecue mecca Fette Sau, German for Fat Pig, and instantly fell in love. “I tried it and thought, Whoa—this is pretty amazing!” he said, noting the full-bodied ale’s balance of Belgian and American flavors. “I was super-psyched when I heard we were playing here.”
It was something of a home game for Todd Michaelsen, who was reared outside Saratoga, and had two uncles, two aunts and three cousins in the crowd. He introduced the band’s biggest hit, “Moonshine,” as a “bona fide, Grade A drinking song.”
“Sing along,” he added, “or drink along.”
For his part, Todd was enjoying the Pumpkin Ale (he actually said he was “rocking” the Pumpkin Ale, which is OK to say when you make your living rocking), but switched to the Ball Bustin’ Brown during intermission. 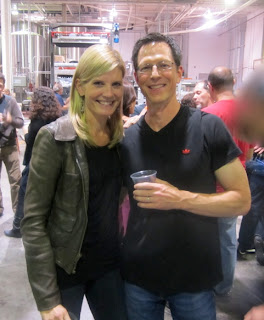 Representing the 13th pilot brew out of the experimental brewhouse, the Ball Bustin’ Brown–an imperial spiced brown ale, topped off with cardamom and coffee–comes with a back story as flavorful as its malty taste; it was created by tasting room manager Aaron Pozitfor his wedding this weekend. “Sure to bust your balls, just like my fiancé,” he wrote in the beer’s description. Hopefully fiancé Alicia doesn’t read that until after the nuptials are official.
Most in the room were regular attendees of Bro’s monthly shows (that would include his wife Kate Snow, a correspondent on Rock Center With Brian Williams), while others simply stumbled upon the event. Christine Finer of Harrison was checking out the Captain Lawrence website to see when the Pumpkin Ale was available (it most definitely is), and saw there was music going on. It wasn’t hard to get husband Mike on board. “I thought it sounded great,” he said, sipping the Liquid Gold while Christine enjoyed her sought-after pumpkin brew.

Their last live music was Mumford & Sons on the water in Hoboken. “The band’s really good,” said Christine, nodding toward the improvised stage. “It’s nice to see bands in smaller venues.”
Armed with his beloved Ball Bustin’ Brown, Todd Michaelsen promised the crowd “a wild second set” as the Dragons returned to the stage. Indeed, he even put down the guitar for a trumpet on one track.
While My Pet Dragon plays a steady lineup of hipster joints in the City, the novelty of their first brewery gig seemed to energize them. “There’s something about standing on a bunch of pallets that’s pretty awesome,” Todd told the crowd. “We’ve played a lot of stages in New York, and half don’t sound this good.”
A few hours later, the Ball Bustin’ Brown still on his brain, not to mention his palate (that’s not to be confused either with “palette” or “pallet”), Todd took to Twitter. (If it’s any indication of rock stardom, he’s followed by Barack Obama.)
“I’ve become a huge fan tonight of @cptlawrencebeer,” the singer tweeted. “The people rock there and the brew is faaantastic.”