The Captain’s Log
It was a pretty idyllic setting that got even better. 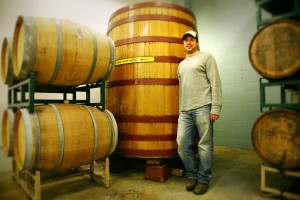 Scott Vaccaro, owner of Captain Lawrence Brewing, was at the Biergarten at the Standard Hotel in Manhattan, for a CL-sponsored event called Oyster Bash, the sun shining and a view of the High Line and the Hudson off in the distance.
Scott was enjoying a few oysters and, naturally, glasses of Freshchester Pale Ale, family in tow, when this postcard of a Saturday got even sunnier. His phone buzzed with a text message. And another, and another–friends congratulating him for Captain Lawrence winning three medals—gold, silver, bronze—at the Great American Beer Festival in Denver.
For makers of fine beer, the GABF is, in Scott’s words, “the granddaddy of them all.”
“As I was slurping oysters and drinking beer, it was the last thing on my mind,” Scott says. “The gold, silver and bronze, all in one year. It’s a trip…it’s awesome to win.”
The three medals—awarded to the Barrel Select – FO/BB, the Barrel Select – Gold, and the Golden Delicious apple brandy barrel aged tripel ale—give Captain Lawrence seven in its history, an outsize performance for a small brewery. (Put another way, four medals went to New York-based brewers this year, three of them to Captain Lawrence.)
The heavy medal performance was a far cry from last year, when Captain Lawrence was shut out with Scott out in Denver. Historically, Captain Lawrence seems to win when Scott stays home, and lose when he’s present at the event—though catching up with old friends and sampling the best of the beer world at GABF is hardly a lost weekend.
Closer to home, Captain Lawrence has some seasonal brews at various stages of readiness. The Golden Delicious, aged in apple brandy barrels, is being bottled, and will be available in the tasting room and in stores in the coming weeks.
Captain Lawrence has also gotten label approval for a couple noteworthy brews. The Smoked Porter, to be sold in 16.9 oz bottles, will be available in mid November, while a Winter Ale is in the hopper too.
The brewery also purchased a dozen rum barrels from Rogue Ales Distillery in Oregon, trucking them across the U.S. to hold some 250 cases of Smoke From the Oak imperial porter. Past editions in the Smoke From the Oak series were aged in wine, bourbon and apple brandy barrels.
Captain Lawrence also hosted Cooktoberfest, along with the Cookery in Dobbs Ferry, Oct 22. Chef David DiBari whipped up creations from his beloved Doughnation Pizza Oven, along with a Carnage Station, Sloppy Joes Station, Confit Baby Back Ribs–and a beer brewed special for the occasion.
The unnamed brew was a “strong Belgian-ish brown ale,” says Scott, “with a unique blend of spices Chef DiBari uses in his cooking.”
And as long as the weather holds up, the patio is open for sampling, and other beer-friendly pastimes. “It’ll stay open,” says Scott, “until it’s too cold to throw a bocce ball.”
—Michael Malone (malone5a@yahoo.com)
Captain Lawrence Brewing, at 444 Saw Mill River Road in Elmsford, is open Tuesday through Friday (retail 2-7 p.m., samples 4-7 p.m.); and Saturday, with retail and samples 12-6 p.m., and brewery tours on the hour, starting at 1. The author is paid by Captain Lawrence, partially in Freshchester Pale Ale, for “Notes From the Tasting Room.”