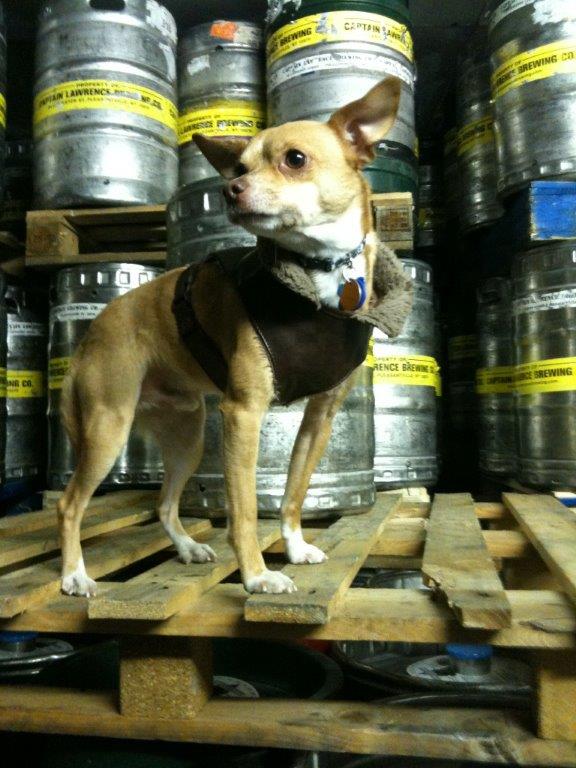 It may be the dog days of summer, but one of fall’s favorite treats is already flowing in the tasting room. Captain Lawrence’s Pumpkin Ale, made from pureed pumpkins and flavored with cinnamon, nutmeg and allspice, is on draft and in bottles. Too early to be thinking of fall? For some, perhaps, but others are plenty pleased to see this seasonal favorite available for tasting.
“The Pumpkin Ale is mild, not overly spicy,” says Scott Vaccaro. “It’s more of a session ale—it’s easy to knock back quite a few.”
The autumnal flavors are balanced with a bit of malty sweetness, and the Pumpkin Ale weighs in at 5% ABV.
Here’s something in the tasting room that might seem like a better match for mid-August’s dog days: the small-batch Chico Pilsner. This new pale lager is the latest iteration from CL packaging manager Randy Shull, who names all of his beers after his Chihuahua/Jack Russell mix, Chico. Scott says the pils is a good match for the hot weather. “It’s clean and crisp and refreshing,” he says. “Perfect for summer.”
The small-batch pilot system also has a couple unique saisons in the works, the seasonal ales featuring a Belgian saison yeast. “We’ll wait to see how they finish, but everything points to a promising start,” says Scott.
The Sun Block and the Captain’s Kolsch remain the summer standards at Captain Lawrence, and the Kolsch, a refreshing German-style brew, enjoyed an elevated profile over the weekend—it was on draft at the PGA Championship in Rochester, with the likes of Tiger Woods and winner Jason Dufner duking it out on the links, and presumably enjoying a Kolsch or two after. (Finishing tied for 40th, Tiger had plenty of time, and reasons, to hit the beer tent.) “If you got thirsty for our Kolsch at the golf championship, you could grab one there,” says Scott.
For those desiring the hoppier, heartier brews, Captain Lawrence is ramping up production on its ever popular India Pale Ale, which debuted early in 2013, and has had some challenges in meeting samplers’ demand. And for a funky twist on IPAs, there is the perennial favorite Birra de Cicco–no relation to Randy’s dog–a wheat-based India Pale Ale that is dry hopped, and spiced with lemon peel. There’s a small amount in the tasting room, but plenty of the “Limone Luppolo” flowing at the various DeCicco’s grocery stores around the county including Ardsley and Armonk. 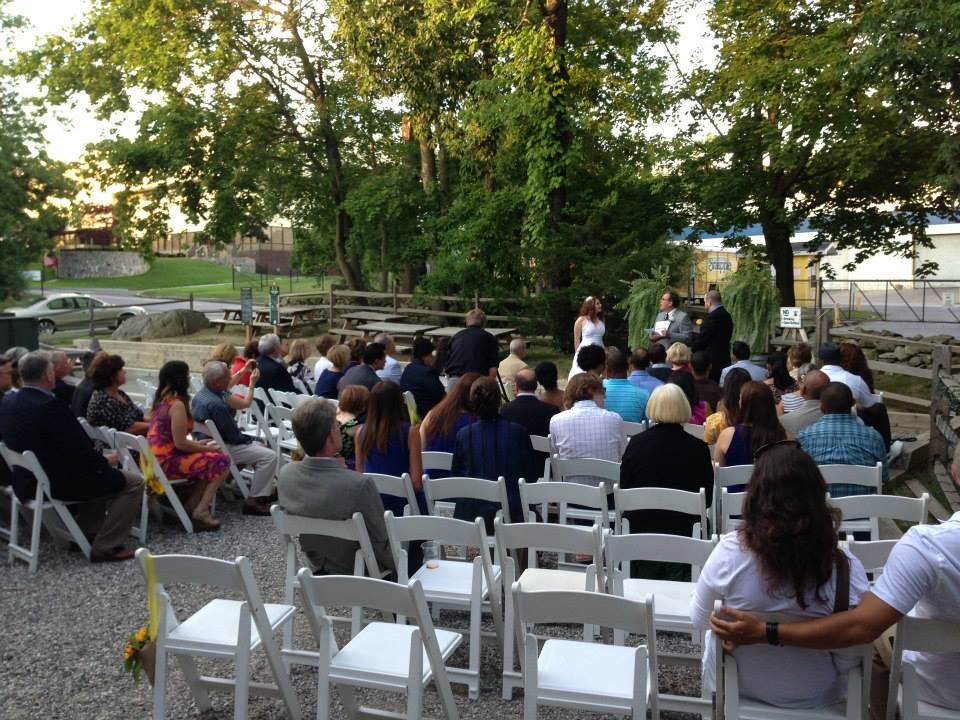 Finally, the brewery has been home for some unique events of late. Most notably, Kevin and Kim Murtagh chose Captain Lawrence at which to get married. The July 27 ceremony went down beautifully on the outdoor patio, spruced up with an array of white chairs and growlers doubling as flower vases, before everyone ventured inside for the reception, where the tasting room and brewery had undergone an Extreme Makeover-esque transformation, thanks to the design wizards at Nilsson’s Floral & Event Design.
As the happy couple heading out for their honeymoon, the patio reverted to its usual beers, bocce and hot dogs self. Despite the fall flavors on tap, there’s plenty of summer sampling yet to go.
Captain Lawrence Brewing, at 444 Saw Mill River Road in Elmsford, is open Wednesday through Friday (4-8 p.m.), Saturday (12-6 p.m.) and Sunday (12-5). The author is paid by Captain Lawrence, partially in Freshchester Pale Ale.