As we noted in this space last week, beer and music go together as well as, say, Simon and Garfunkel…at least in those years when Paul and Artie were getting along…and these steamy summer days only seem to firm up that bond. This Saturday marks the eight annual Pleasantville Music Festival, featuring the English Beat and Delta Spirit, among many others–an event Captain Lawrence has been a part of since the beginning. As in previous years, there will be a beer garden offering, besides shade and its own performance stage, Captain Lawrence Freshchester Pale Ale and the Captain’s Kolsch on draft—a welcome break from the typical overpriced, underflavored beer found at concert venues.

In the spirit of summer and rock and roll and beer, we asked people in the tasting room to share their best concert memories. The responses spanned much of the country, and beyond–and a wide array of musical tastes as well. For Dave Swenson of Eastchester, it was Ozzfest, in San Antonio, around the year 2000. “It was boiling hot—this kind of temperature,” says Dave, nodding toward the 95 degree temps outside. Besides taking in the likes of White Zombie and System of a Down, he says the highlight was being hosed down in the mosh pit from the stage.
His pal, Dave Heskes of Cheshire, Connecticut, worked at the Oakdale Theater in Wallingford for years, and saw Tom Petty, INXS and the Monkees, among others, from a comfy backstage perch. The Daves are sampling the Liquid Gold, the Cold Cousin Brewski, the Kolsch–a far cry from what Swenson was sipping that sultry day in San Antonio.
“It’s a little higher class of beer here,” he says with a hoist of his sample glass.
Across the room, Ray Schroeder of Tarrytown found a higher class of beer—Captain Lawrence’s Liquid Gold–while checking out an oldies bill (Mickey Dolenz, the Turtles) at Tarrytown Music Hall. He’s enjoying the new oatmeal stout from the pilot system, and hoping for a strong selection when seeing Yes at Westbury this weekend with his brother. “He flies up from Florida whenever Yes or Rush is playing,” Ray says.
Across the table, John Lobosco’s tastes run a little edgier. He mentions a semi-private performance by the Ukrainian gypsy punks Gogol Bordello at some downtown New York apartment five years ago. The band tapped a troupe of gymnastics-performing dwarves to accompany them on stage. Ukrainian beer flowed like the Danube. “It was amazing…mind blowing,” John says with a smile.
The Violent Femmes are on the tasting room stereo. “Please, please, please, do not go-ohhh,” implores the singer. The AC is humming and the room smells of hops; no one is moving toward the door and sticky swelter beyond it. 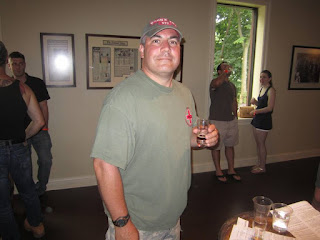 The musical memories traverse the globe. A festival over in Nottingham, England, stocking up on Innis & Gunn pale ale at the dollar store (just ask for “Innocent Gun”). The Chili Peppers and others at Lollapalooza at Great Woods, an impromptu bonfire fueled by pieces of wooden fence. Selling peanut butter and jelly sandwiches at one of the latter Woodstock iterations to earn gas money for the ride home. Pickup soccer with reggae guy Michael Franti before he played some summer jam in Connecticut. Pink Floyd building that wall at Nassau Coliseum three decades ago, just as Roger Waters did at Yankee Stadium last week. Pink Floyd again, in Berlin, helping tear down another famous wall.
Beer—good, bad or other—is often integral to the concert equation. “When people get together, they want to listen to music, they want to drink beer, they want to enjoy themselves,” says John McKee, an army officer from Yonkers who’s enjoying a Captain’s Reserve Imperial IPA. (“Mo’ hoppy, mo’ better,” he says.) “It enhances listening to music—it’s as simple as that.”
John may never take a beer, or a concert, or hanging with friends, for granted again—especially after a painfully dry year in Afghanistan, when he and his fellow soldiers would sit around at night, discussing their favorite beers. “It was rough,” he says.
Pleasantville won’t likely feature staffers spraying the mosh pit with hoses—or even a mosh pit, for that matter. Fences won’t be torn down to make bonfires, and you probably won’t need to sell PB&Js to make your gas money home.
But for good summer music smack in the middle of Westchester—and first-rate beer to boot—you could do worse than throwing down a blanket at Parkway Field this weekend.