Notes From the Tasting Room, Vol. 25 Lazy Saturday Lax Nothing

It was, by several accounts, a lazy Saturday. Another steamy day in a summer full of them, vacation likely over, school starting in short order, the Yankees and Mets stuck in their own relative versions of malaise, and football still a few Sundays away.
If anyone deserves a cold beer and a patio seat in the shade, it’s the square-shouldered members of the Captain Lawrence Brewing lacrosse team. The team competes in the bruising Sound Shore League, its members graduates of elite eastern college programs, such as Hofstra and University of Virginia. Playing at SUNY Purchase, the Captain Lawrence team is, unsurprisingly, the only squad in the league sponsored by a local craft brewery.
“The cool people just call us the Brewers,” quips Gus Levy of Manhattan.
Captain Lawrence Brewing founder Scott Vaccaroplayed “lax”, as the sport’s cool kids call it, at John Jay High School in Lewisboro, and some of his old teammates went on to found a club in the Sound Shore League. So Scott was happy to kick in for jerseys, along with well earned growlers of ale for after games, when the other teams are sipping Michelob Ultra.
The guys are clearly grateful their benefactor isn’t, say, a transmission shop or life insurance broker. “Playing for Captain Lawrence is a lot cooler than playing for the local pub or some company,” says Dan Wolpert of Manhattan.
The brewery boys went 4-3 this summer, then were knocked out in the first round of post-season play by the eventual champs. Today represents their first visit to the brewery as a team, and they wear their Captain Lawrence jerseys proudly as they keep Aaron Pozit, barkeep at the spankin’ new patio bar, busy.
Sharing a few beers with your teammates is, as one might expect, an integral part of the Captain Lawrence lacrosse experience. “Most of the guys are pushing 30,” says Chris Wolpert of Long Island. “Getting on the field can be a chore, so getting to hang out after is a big part of it.”
Perhaps knowing full well that beat-up lax guys would be in the house, a masseuse has set up his massage chair near the tasting room entrance. If that doesn’t get the kinks out, the Rolling Stones have another suggestion: “Mother’s Little Helper” plays from the house system.
The experimental brewhouse is cranking, and people are sampling esoteric new brews such as the Summer Sipper cream ale, High & Dry Rye and, for the stout of heart, the Six N’ Change black IPA–along with old standbys such as the Freshchester Pale Ale and Captain’s Kolsch. 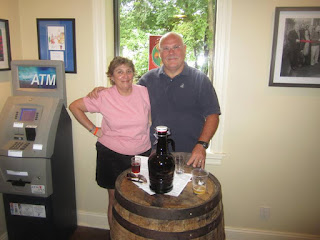 “Good beer, good company,” says John of Valhalla, raising a glass of Pale Ale along with pals Elio of Thornwood and Jackfrom White Plains.
The summer is all but over, but Nick and Shireen Witkowich of Yorktown are squeezing a few more hours of fun from it. They’ve popped in for a few samples and a debate about where to head for dinner; The Bayou in Mount Vernon is leading the pack when I happen by. Shireen is quaffing the Summer Sipper, while Nick sticks with his preferred Kolsch. They’re reminiscing about their recent beer and wine vacation to the Finger Lakes, and the cozy old Captain Lawrence digs in Pleasantville. “It had a lot of character,” Nick says.
Shireen has just bumped into a young lady who was part of her Girl Scout troop many years before, and was tickled to reconnect. Because that’s what happens when you make something out of a lazy Saturday—get out, try a new brew, see who you might bump into. “That’s the kind of thing that happens here,” says Shireen.
Meanwhile, back on the patio, more and more members of the brewery’s lacrosse team are turning up. After a summer of full-contact lax, a game of bocce and a few beers sound mighty inviting. “I wouldn’t be on the team the last three years,” says Chris Wolpert as a fresh round arrives, “if not for the social side of it.”