Notes From the Tasting Room, Vol. 9

Music Discussion Reaches Its ‘Peak’
Caroline Corley, the voice of Westchester’s popular rock radio station 107.1 The Peak, lives the rock and roll lifestyle, and certainly looks the part—dressed all in black, a jangle of bangles around her neck, wrists and ankles, each with a unique story—as she strides into the Captain Lawrence tasting room. 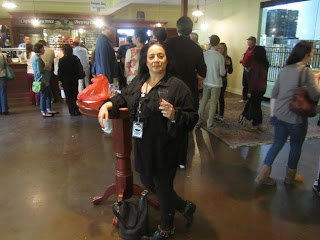 But while rock and roll and booze have long been passionate bedfellows–like Jagger and Richards, the pair is manic, a bit destructive, and usually pretty productive–Corley goes easy on the potent potables. She prefers small glasses of quality beer, which makes a visit to the tasting room a logical one. The fact that she lives close enough that she could get there in the amount of time it takes a Ramones song–1-2-3-4! to fade-out– to play on The Peak, makes the jaunt a no brainer too.
“Beers and rock and roll,” Corley says over a barrel. “It’s the formula. That’s what makes good fun.”
That voice, doing the Peak morning show out of White Plains, is a familiar one to anyone in Westchester, and beyond, who listens to rock. Her shtick includes references to the skinny young rock stars she calls her boyfriends, shout-outs to her chocolate lab, Mick Jagger, and reports about concerts around the world from her well situated “spies.”
Corley’s face is familiar too—perhaps never more so than at the annual Pleasantville Music Fest, as she ebulliently introduces the next act. In person, she’s warm and engaging. For someone paid to deliver monologues to the masses each day, Caroline Corley is surprisingly adept at listening.
We sip a pair of Freshchester Pale Ales and discuss, naturally, music. She raves about Jack White (“could fart in a bucket,” she says, and she’d buy the record), thinks the Stones kick the Beatles’ asses, and scrutinizes lyrics the way an English major studies Elizabethan sonnets.
Corley’s tastes in beer run the gamut. She cops to “girl” tastes—light and fruity, such as a Blue Moon White, but digs stout as well. “If it tastes like chocolate,” she says, “I’m in.”
She enjoys the Pale Ale too, and asks for a Family Meal for Round 2. When I return from the bar, Corley is chatting up a couple nearby. As chance would have it, the guy is the general manager at the iconic Capitol Theatre in Port Chester, which will reopen in late summer–decades after a heyday that featured everyone from the Grateful Dead to Pink Floyd to Janis Joplin. 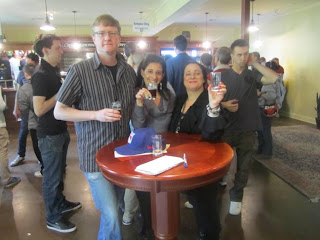 Tom Bailey, who formerly managed celebrated Manhattan jazz joint The Blue Note, isn’t at liberty to reveal who’s lined up to play the Capitol, but says it will be a diverse mix: classic rock, jam bands, more current stuff. In fact, it sounds a little like the Peak playlist. “There’ll be a little something for everyone,” he says.
Corley and Bailey—Westchester rock royalty, or at least two of its cool kids—have a million questions about each other’s operation. And the two can talk, especially when live music is involved. Bailey, sipping a Family Meal, is also curious about the Captain Lawrence operation, and suggests its brews may be a great fit at the Capitol. “If you want to serve good beer, and local beer, this is where you go,” he says.
Bailey, also a certified sommelier, says there will be eight draft lines to keep visitors well sated. “We fully intend to have good beer,” he says.
Corley samples her Family Meal. “Like drinking a clove cigarette,” she says with a smile and a bat of her big brown eyes.
A full scale music discussion commences. I ask what everyone was listening to on the way over.
“The Peak, of course,” says Corley.
“As a matter of fact, The Peak,” echoes Bailey. He gives his blue New York Rangers hat, atop a mop of red hair, a tug. “To be honest,” he adds, “we put the Ranger game on at 3.”
I’m thankful they don’t ask me, as I’d failed to eject my kids’ “100 Great Singalong Songs” CD on the short hop over. (The Offspring’s music? Good. My offspring’s tunes? Not so much.)
We discuss current raves and faves. Bailey goes for the young Texas bluesman Gary Clark Jr. His girlfriend Susan Mason, an events planner at Crabtree’s Kittle House in Chappaqua, votes for the Brit bluegrass act Mumford & Sons.
Corley, meanwhile, is effusive about a couple cerebral bands starting with D from the gloomy Pacific Northwest: She calls Colin Meloy of the Decemberists “the single greatest lyricist” currently putting words to music, and puts Death Cab For Cutie in the same echelon—quoting their metaphor for a Vegas slot machine, “a robot amputee waving hello,” from the “Little Bribes” track.
Music. Beer. Beer. Music. The cynics have been saying rock is dead for decades, I think as I climb into my car, eject the kiddies’ mind-numbing disc and turn The Peak up loud. But for today, tomorrow, and the foreseeable future, it’s alive and well in Westchester.
–Michael Malone (malone5a@yahoo.com)

Captain Lawrence Brewing, at 444 Saw Mill River Parkway in Elmsford, is open Tuesday through Friday (retail 2-7 p.m., and samples 4-7 p.m.); and Saturday, with retail and samples 12-6 p.m., and brewery tours at 1, 2 and 3 p.m. The author is paid by Captain Lawrence, partially in beer, for “Notes From the Tasting Room.”