To Sip or to Pair Albarino 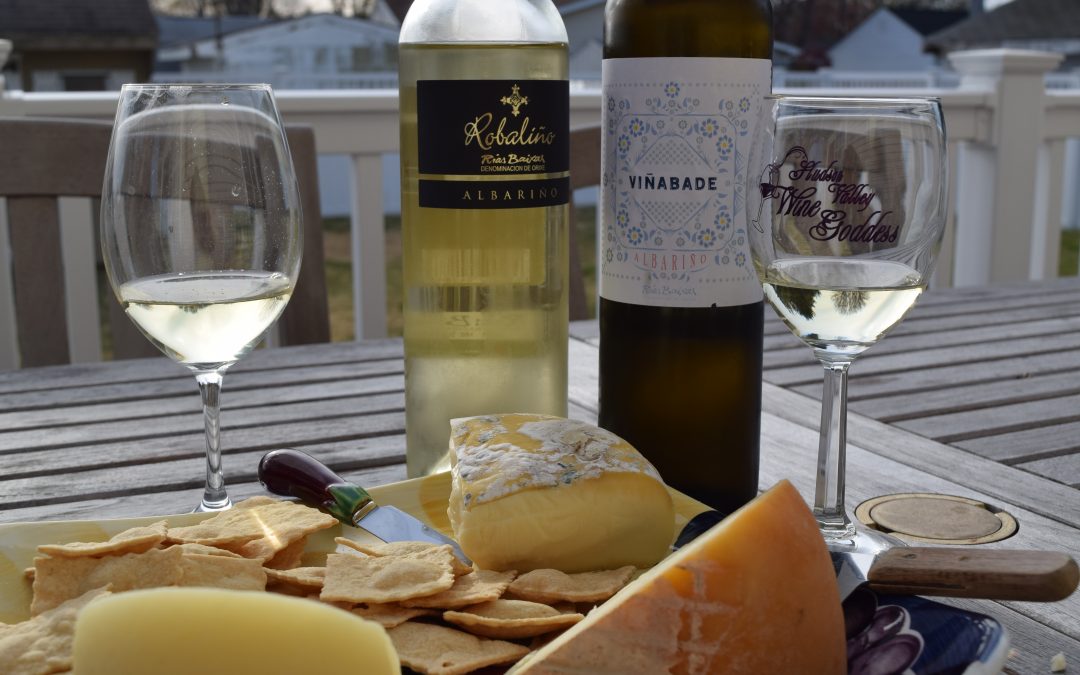 This week in the land of Galicia, Spain we tasted two Albarino’s that that were pretty different. One I will call the sipper the other the pairing wine.

As I am learning, Albarino is quite the diverse wine and has many personalities.  For this pairing I happen to be in New York City the day before and stopped in at Murray’s Cheese and picked up some cheese from Galicia and other parts of Spain along with Prosciutto. If you are in NYC, Murray’s is in the Grand Central Market at Grand Central Station and on Bleeker Street. A must for the cheese lover.

I am going to first discuss the wines, then the food and the pairings.  Since Rias Baixas is known for it’s seafood, I chose to make a scallop dish to pair with the two wines.  One wine actually paired much better than the other.

2014 Rectoral do Umia Vinabade – 100% Albarino grapes from the Salnes Valley where the soil is composed of  50% granite, 25% clay and 25% sandy and the birthplace of Albarino. The name Vinabade is reference to the monks that brought Albarino to the region. Golden in color with aromoas of pear and peach with a hint of green apple. The palate was full of lemon, pear, lime, hints of minerality and lemon pith on the finish. This wine was a bit mellow and not as acidic to the feel as others. Wine retails for $15

Senorio de Rubios Robalino – 100% Albarino grapes from the Condado area of Rias Baixas.  This area is named after the Tea River, is located in a mountainous area inland and is known for cottage cheese and honey.  The soils are granite and slate which attributes to the wet stone I got in the bouquet of the wine. The aromas from this wine were complex as wet stone, peach, grapefruit and hay filled the glass.  The palate was crisp and acidic with flavors of pear, citrus, lime. This wine retails for $18

I served three cheeses from Spain that we tasted each cheese with the wine.

Arzua Ulloa – Made on the banks of the Ulluo River in Galicia with milk from Rubia Gallega, Frisian and Alpine Brown cows. The cheese is aged for two weeks. It’s a mild cheese.

Mahon Meloussa – Made in Minorca in the Balearic Islands. It contains 5% sheep milk and 95% cow’s milk. It’s a harder cheese, but soft, and has a sharpness to it.

Malvarosa – Produced from Guirra sheep, this cheese is rich and sweet and has a hint of butterscotch on the finish. 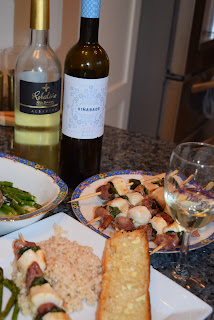 Since Galicia is known for it’s seafood, I went and picked up some Cape May scallops and prepared them in a lemon marinade with basil and Proscuitto. Served them with couscous and aspargus with lemon and garlic.

What we found in the pairings is the Arzua Ulloa took away some of the acidity from the Robalino and made it softer, thus blending very well and the aspargus complimented the Robalino.

The Malvarosa cheese with the Vinabade was a marriage made in heaven. As my friend Jen said “best wine and cheese pairing I can remember”. The Vinabade paired great with the scallops and the asparagus. Everyone was playing nice in your mouth. Nobody was bolder than the other and trying to take over.

Overall I think the Vinabade was the more food friendly wine of the two, while the Robalino is a great summer sipper.