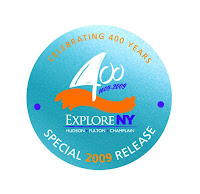 A Quadricentennial Commemorative Wine Label will brand special 2009 releases of Hudson Valley wine to celebrate the 400th anniversary of the discovery of the Hudson River. Participating Hudson Valley wineries will release one red and one white wine made from 100% Hudson Valley-grown grapes or fruit to commemorate the year-long celebration.

These special gold labels are emblazoned with the Hudson-Fulton-Champlain Quadricentennial-themed logo, “ExploreNY400” and will help to place a spotlight on the contributions the region has made in the world of viticulture since its earliest origins. Tourists can visit the wineries or attend one of the many wine events around the region this year and take home a souvenir of the Quadricentennial in the form of a bottle of locally-made wine. More information about the labels and the winemaking history of Hudson River Valley can be found in the Spring 2009 issue of Hudson Valley Wine magazine or online at www.hvwinemag.com.

Nearly 50,000 bottles of these special 2009 commemorative Quadricentennial wines will be available for purchase at participating wineries throughout the Hudson Valley. The wineries include (in alphabetical order):

The Hudson River Region is one of nine designated AVAs (American Viticultural Areas) in New York State, and is the oldest winemaking region in the country with its grape growing origins dating back to the discovery of the river by Henry Hudson in 1609. Hudson remarked on the abundance of native grapes and fruits growing alongside the banks of the River during his maiden voyage and shortly thereafter, early settlers were encouraged to grow grapes to make wine. The earliest vineyards in the country are attributed to the French Huguenots who settled in present-day New Paltz, Ulster County. There are now over 30 wineries located in the region on both sides of the Hudson River, with the oldest winery, Brotherhood Winery, remaining the oldest winery in continuous operation in the United States.

This year, 2009, marks the 400th anniversaries of the voyage of English Captain Henry Hudson, who led the first European expedition to sail up the river that now bears his name, and the voyage of Frenchman Samuel de Champlain, the first to discover the namesake lake. To celebrate these simultaneous 400th anniversaries – as well as the 200th anniversary of Robert Fulton’s maiden steamboat journey up the Hudson River – New York State is planning a yearlong series of events, programs and projects that highlight the discovery of New York, celebrating the State’s Dutch, French and English roots and heritage. For more information go to www.exploreny400.com.