Sangria with a View 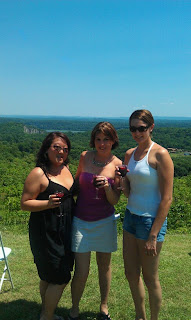 By Chrystal Corsino aka “The Babysitter”


Three girls, 90 degree day what better to do then head down to Sangria Fest at Benmarl Winery.  We knew the day was gonna be awesome when we took the scenic route to find the winery.  We spent a half hour driving all around Marlboro and found 2 other wineries first but did not stop as we wanted Sangria! Eventually we found Benmarl.  They really need better signs… or we needed a gps…

We began our day with the 9 tastings offered to us 4 wines, 5 sangrias.  The Seyval Blanc was popular with Amanda and Elisa and both said it was great crisp white wine. I enjoyed the Red Zin it had a nice toasted marshmallow finish and was not to heavy for summer.

We were offered 5 Sangrias and we were given receipes for all of them except the Benmarl signature Sangria which was the overall favorite. You could only buy it by the glass, no bottles offered. They would make a ton of money if they bottled some up for people to take with them. The other Sangrias were Bee Tea (used riesling) which had a very nice honey and Camomile tea flavor with a kick of rum, Tropical, made with their  Trimanette and Seyval Blanc, Spicy Sangria using the Zinfandel and if you like hot sauce this was for you.  You don’t feel it till the end and it kicks in.  Lastly Berry Sangria made with the Dechaunac.  All of these were amazing variations on traditional Sangria but the traditional Sangria won us over.


In addition to the Sangria they had a food table set up with amazing pulled pork and sausage and peppers.  Benmarl is a great place for a picnic, and they allow you to bring in your own picnic as well. From 2-7 they had music and Flamenco dancing.  Unfortunately we missed this as we got there early and the heat took over.  Winery tours were offered on the hour.


The view alone is worth a day at this winery, so whether its for Sangria fest or just a day out and about, go take in the view at Benmarl and enjoy some great wines also.