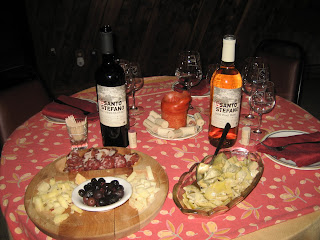 One day you have it all and in an instant as we have all seen, it’s lost.  The devastating earthquake of 1980 changed Giovanni Petretta life forever.


The Petretta family was one of the founding families of Santo Stefano del Sole in Avellino, Italy. Coming from a family of winemakers dating back 500 years, Giovanni never imagined leaving his homeland.  The 1980 earthquake destroyed the town Giovanni and his family had lived and the United States was giving survivors work Visa’s.  With only a suitcase each, he, his mom and brother came to the United States. 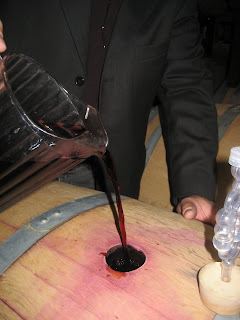 Giovanni worked as a decorative contractor and was contracted to paint Kathleen’s house and that was the beginning of a life together.  Giovanni had a vision to make wine and Kathleen encouraged him to make that vision a reality.


Santo Stefano Winmaking Club is a unique place.  Unfortunately Giovanni doesn’t purchase his grapes from the Hudson Valley or New York for that matter.  I did speak with him about this and hopefully in the future he will begin to purchase his grapes in New York.  They have also planted some Noiret.  Giovanni purchases his grapes from California and produces a variety of Italian varietals.  He also allows you to make your own wine and has winemaking sessions for you.  You can make full barrel, half barrel or quarter barrel. 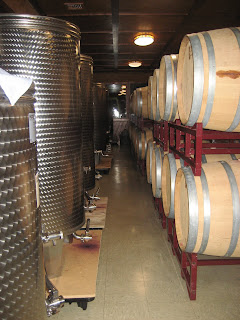 Giovanni himself produces 12 varietals of wines.  He took me on a tour of his state of the art, temperature controlled facility. I had to grab a glass as he said “No tours are done empty handed.” (Not to mention the wonderful spread of food they had as well) Many of his wines are sulfite free.We began at the “Believe 44” tank. This wine is a blend of Cabernet Sauvignon, Sangiovese and Petite Syrah.  It is his Super Tuscan with flavors of clover, spice and raspberry.  Grace and Joy is a blend of the “4 grape of 3 nations” representing vinifera grapes from France, Spain and Italy.  (Cabernet Sauvignon, Tempranillo, Sangiovese & Petit Syrah).  Then we got to his family recipe “Vino Patrino”.  This is a Bordeaux style wine with a Cabernet Sauvignon base with Petite Syrah and Merlot.  He wouldn’t tell me the percentages, nor Kathleen.  There were others I had the privilege to taste like the 2009 Cabernet Franc that was candied with a nice black pepper finish, the 2009 Pinot Noir which Giovanni says is his problem child and it spends one year in French Oak and his 2009 Sangiovese which he describes “it’s growing up to be a nice Big Boy” after spending a year in French Oak. 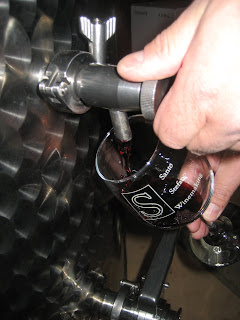 Santo Stefano is only open by appointment only.  They cater and rent out their facility for events.  Twice a month they host live music and a family style dinner.


Giovanni says their are 5 necessities of being a good winemaker

When I asked Kathleen what makes her husband different from other winemakers she said his lack of ability to compromise.