I can control a lot of things in the cellar, but I can’t control Mother Nature
~ Jeff Keene, Winemaker, Cornerstone Cellars – Napa

When I was in California back in January I set up a tasting for me and the “Chickies” at Cornerstone Cellars Napa.

Cornerstone is owned by four neighbors of which two are currently involved, doctors in Memphis. Cornerstone is the Reserve label, and they are going into their 22 harvest. For 17 years they only produced 2000 cases of 2 Cabernet Sauvignons.  Then the doctors decided to get serious and they went from 2000 cases to 10,000 cases of which 2/3 is under the Stepping Stone label. Winemaker Jeff Keene tells the story well in the below video, the history, the differences between Stepping Stone and Cornerstone

We then moved on and began to discuss the trends in the Napa region.  Trends moving away from Chardonnay and into Sauvignon Blanc.  Below Jeff talks about those trends that he is seeing. 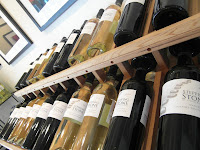 Next in the glass is the 2010 Stepping Stone Riesling.  Beautiful flavors of apricot and some peach. Not as acidic as a New York Riesling.  I think I am becoming spoiled with the Finger Lakes Rieslings and have become accustomed to liking racy acidity in my Rieslings.

Now we moved on to 2011 Stepping Stone Rocks which is a nice white table wine.  It is a blend of Chardonnay and Gewurztraminer.  It was a very nice table wine with the spice of the Gewruz on the the finish. 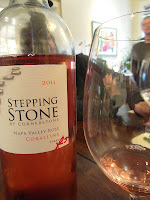 Then it was onto the Stepping Stone Rose Syrah.  Here Jeff picks the Syrah early at 22 1/2 – 23 brix (thats early by California standards) He lets it sit whole cluster three hours on the skins.  He treats this wine like a white wine and then puts it through a 3 hour press cycle.  I actually liked this rose.  It was very nice.

The 2009 Cabernet Franc was picked at 24 1/2 brix which allowed it to have what I love, a nice soft black/white pepper finish. 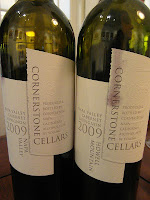 We ended the tasting with three Cornerstone 2009 Cabernet Sauvignons. The first is the Napa is at blend of 95% Cabernet and 5% Merlot.  The Merlot is added to give some concentration to the mid palate.  Nice cherry and red fruit flavors.  The grapes came from Oakville.  The 2009 Howell Mountain Cab was a bit bolder.  Then there is the blend and I can’t find the name or the bottle from my notes and pictures.  There was only 200 cases of this made.  It is a blend of 95% Cabernet Sauvignon, 2.5% Cabernet Franc and 2.5% Merlot.  It was wonderful.

I want to thank Craig for setting up this tasting.  I am sorry we didn’t get to see you.

If you are in the Napa area, I highly recommend you step into Cornerstone Cellars!