The Back Room Experience 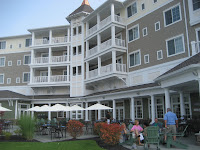 The purpose for my trip to this competition was so I can see how it is run and improve on the Hudson Valley Wine Competition. I will say there will be many changes forthcoming for the 2010 competition. During the competition I was under a gag order, I could not blog or tweet about it due to situations beyond ones control. 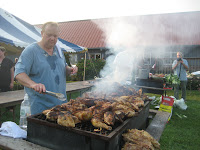 Sunday night it began with a BBQ at Lakewood Vineyards. This was the meet and greet stage. We drank some wonderful Rieslings from around the world. We had a 1990 German Riesling that was outstanding, but I didn’t write it down. We met everyone we would be spending the next two days with. Coke Roth who was one of the judges and from what I hear an amazing cook, actually cook dinner for all of us. The chicken, sausages, veggies were wonderful and cooked perfectly! 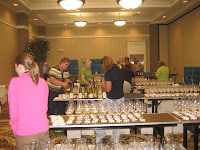 Monday was the beginning of our Back Room Experience. What is working in the back room like at a large wine competition….exhausting. I should have gone to the gym a good 3 weeks prior to the date and worked on my upper body strength. I was assigned to Table #1. I cared for my 4 judges for two days. The judges were wonderful; Ann Littlefield, Direct Wine Marketing Brand Champion, Napa CA, Maggie Rosen, Independent Journalist & Author, Fred LeBrun, Columnist, Albany Times Union, and Peter Marks, Wine Educator, Icon Estates, St. Helena, CA. I carried trays with tasting glasses full of wine (24 max per tray) to them and cleared the table after the tasting as well as dumped the leftover wine and the dump buckets into a larger bucket. I broke NO glasses!

Paul on the other hand was drying glasses and sending the dirty glasses to the kitchen for washing. He worked with Jonathon Daly from the Pacific Rim Competition. It was quite humorous as a glass broke, John always said that it was his favorite. But we won’t mention when the tray was being carried out by a male back room staffer and a glass fell and we had a small domino effect. Very lucky, as we only lost one glass. 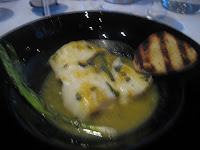 Monday evening we were treated to a wonderful dinner at Red Newt Cellars We had appetizers of local cheese and duck confit on flatbread. All the Silver Medal Wining wines were brought over for dinner. For dinner, I had the Sea Bass which melted in your mouth! Paul had the vegetarian dish and he said it was wonderful. Desert was a blueberry cheese cake which was so light and a chocolate something that was light but very rich. (I ordered one and Paul the other and we switched half way thru). Deb Whiting did a wonderful job and she is an amazing chef! With a full belly we headed back to the hotel to rest up for the final round of competition – The Governor’s Cup

For the final rounds all the judges tasted the Double Golds to decide which wine won the Governor’s Cup. For these rounds, the men carried the wine into the judging room and we were clearing glasses and putting glasses on the table. I was reaching in, out, around trying to make room for all the glasses at one point. We went from about 50 wines to 2 to the Winner. 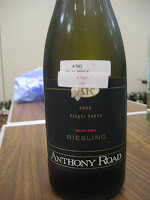 Imaging everyones surprise when it was announced that Ann and John from Anthony Road won! They had been assisting in the back room. All of us back room staff went to find the open bottle of their Riesling to taste and toast to them. Congratulation Ann and John! It was a pleasure meeting and working with you for two days. 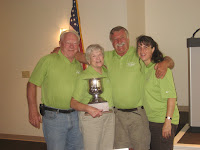 It wasn’t over yet. All the wine needed to be loaded into the truck, as well as the glasses and trays. More heavy lifting. When we were all done, we headed over to the track for the Governor’s Cup Lunch where the award was presented.

I would like to congratulate Steve Osborne of Stoutridge Vineyards who won a GOLD for this Cab Franc/ Noiret blend. Congratulations Steve. This is his first medal and it’s well deserved!

Complete results of the 2009 Classic can be found under “New York Gold at www.newyorkwines.org