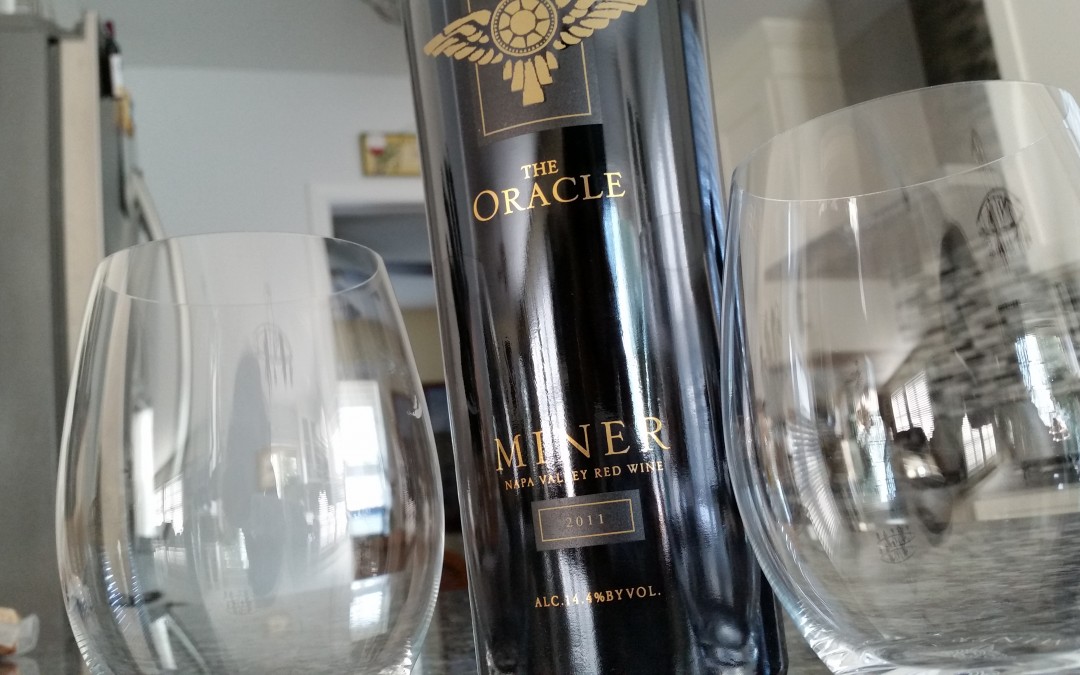 Miner Family Winery is located on the Silverado Trail in Oakville, CA.  I can’t tell you how many times I’ve driven past them and wanted to stop.  For some reason it just didn’t fit into our schedule. As I write this my mind has taken me to driving north on the Silverado Trail and passing Miner on the right hand side of the road.

Although I still haven’t had the chance to stop in their tasting room, I did have a chance to meet Lisa Barker their Director of Marketing at the Wine Bloggers Conference as well as participate in their 2011 The Oracle virtual release tasting back in September.

The Miner Family Winery is a fairly new winery when you look at some of the history of Napa.Their story began when Dave Miner who at the time was working in the software industry became president of Oakville Ranch Vineyards in 1993 which was owned by his late uncle, Robert Miner.  In 1996 Dave decided to custom crush and start his own wine label.

In 1999 after 15 months the caves at Miner were completed and Dave and Emily marry and purchase the winery building from his family.  The first Miner Family wines are released. 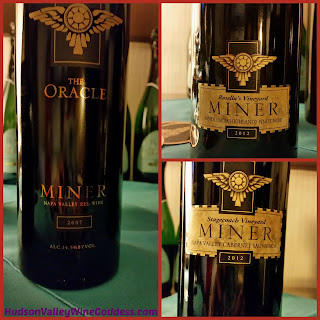 At the Wine Bloggers Conference I was lucky enough to taste the 2007 Napa Valley, The Oracle, 2012 Stagecoach Vineyard Napa Valley Cabernet Sauvignon and the 2012 Rosella’s Vineyard Pinot Noir.  I was so impressed.

I really like the Pinot Noirs coming out of the Santa Lucia Highlands where this vineyard is located. A very mature Pinot Noir with plum, cherry and nutmeg and hints of oak.  It did spend 15 months in French Oak. SRP $60

The 2012 Stagecoach Vineyard Cabernet Sauvignon was 91% Cabernet Sauvignon, 7 % Cabernet Franc and 2% Merlot.  Because I love Cabernet Franc, I immediately picked up on the hint of black spice that it brings to the wine. A very strong and bold wine with dark cherry, notes of black licorice and firm tannins  This wine will cellar very will, at least for another 3 to 5 years. SRP $75

I’m glad I got to taste the 2007 The Oracle as I got to see how the wine ages.  Honestly, it probably has a few more years in the bottle and will still be tasting stellar.  Filled with black fruit and a hint of cassis it has very mature structure and the tannins are just beginning to soften.  Make sure you decant it first. 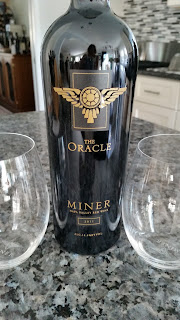 Now onto the  2011 release of The Oracle.  One thing to note The Oracle is actually their flagship wine.  A Bordeaux Blend sourced from the Stagecoach Vineyard on the eastern hills of Napa. The 2011 is 49% Merlot, 38% Cabernet Sauvignon, 11% Cabernet Franc and 3% Petit Verdot.  It spent 20 months in the barrel and 50% of that was in New French Oak.
The folks at Miner we so kind in sending me the bottle to take part in their release party, it also came with two Riedel Glasses etched with the Miner name on it.  I felt very special! 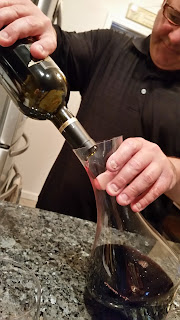 We did decant this wine and I suggest you do the same if you purchase a bottle of it. The wine was full of black cherry, black raspberry, dry herbs.  It was a bit hot but to be expected with an alcohol content at 14.4%. Strong tannins, this wine will age nicely. 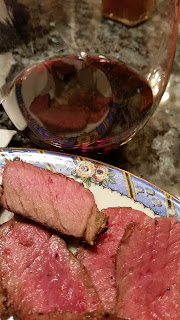 We paired the wine with a grilled Porterhouse Steak.  The steak softened the tannins in the wine.  The wine is strong and bold and really stood up nicely to the steak.  SRP $90
If you find yourself in the Napa area, make sure you stop at Miner.