For the past few weeks I’ve been offering wine education classes in the Hudson Valley.  Topics range from Intro to Wine, to specific wines and wine regions.  I recently gave a class on reviewing wines like a critic, and we tasted a variety of red wines from around the world.  Instead of listening to me and my reviews, I’ve incorporated the classes opinions into this post.

Before we began to evaluate we briefly went over the flavor profiles of the grapes that we would be tasting in the wine.  The wines being tasted were: 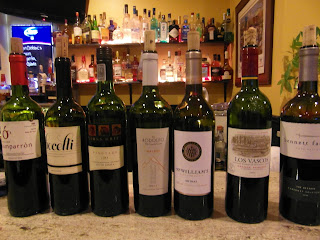 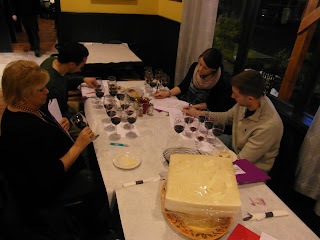 Camparron Novum Tinta De Toro 2010 – Appearance everyone thought was okay and on the nose we found dark berry and chocolate.  It wasn’t to exciting.  The flavors we tasted was jammy, chocolate and felt the texture was thin.  Over all our of 20 points we gave the wine a 13 which would have been a Silver Medal
Bocelli 2011 Sangiovese – Appearance was okay.  Aromas of smoke and rhubarb were found on the bouquet leading to strawberry and cherry on the palate.  Overall impression was good.  The group gave this wine a 14 which would be a Silver Medal.

2009 Lions Drift Pinotage – Appearance was average. Layers of smoke, plum, leather and oak filled the nose, while the palate was not that impressive.  Many tasted burnt rubber and oak.  Some felt it was hot and medicinal. The group rated this wine a 8.75  which according to the AWS scale would make it deficient.

2011 don Rodolfo Vina Cornejo Costas Malbec – Layers of dark fruit, berries and vanilla filled the air leading to a jammy, strawberry palate that finished with some bitter chocolate.  One of the students noted banana on the palate.Overall impression was okay. 12 was the rating for this wine which would make it a Silver Medal.

2010 McWilliam’s Hanwood Estate Shiraz – This one was the favorite of the group. Appearance was good. A fruity nose lead to licorice and spice aromas.  The palate was layered with dark fruit, blackberry, thick and tart with black currant on the finish.  This win rated 15 with the group which would make it a Gold Medal, hence it was their favorite.

2009 Los Vascos Domaines Barons de Rothschild (Lafite) Grand Reserve Cabernet Sauvignon – Unfortunately for this wine the nose wasn’t that friendly.  Perfume and rubbing alcohol was the aromas of the glass.  The palate found green notes, spice and bark.  Some felt it was hot.  The group rated this an 7.75 which unfortunately is deficient.

2006 Bennet Family Napa Valley “The Reserve” Cabernet Sauvignon – A very flowery nose of roses, cherry and red berry lead to a palate of red berries and tannins. The group rated this wine an 11.25 which would make it a Bronze Medal. 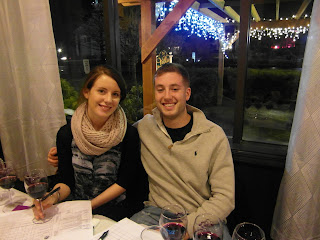