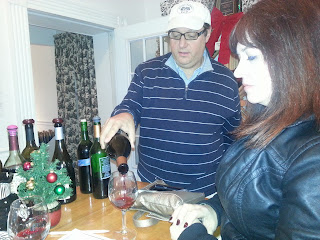 During December I took a ride up to Hudson-Chatham Winery to visit Carlo and Dominique.  I haven’t been up there in a while and forgot how beautiful it is up there.  It is so nice to see that they are growing.

Hudson-Chatham is up to 3000 case production and they just recently expanded their facility.  (I did get to tour their new wine making facility but it was dusk and my pictures didn’t come out to well.)

They’ve been busy, as they also expanded their tasting room.  It look great! 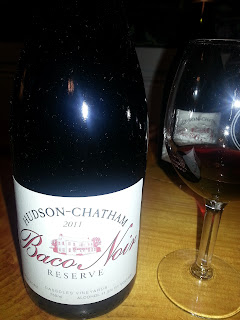 We tasted mostly reds, all reds and I have to say they were nice.   I was very surprised at how nice the 2011  Baco’s were.  2011 was a tough year with the hurricane at harvest.  In the past I have favored the Old  Vines Baco, but this tasting I really liked the 2011 Baco Noir Reserve from Casscles Vineyard in Athens, NY. It was had a very  raspberry, fruity nose and was a tad smokey with a little hint of spice.  This will be great if aged a few years.

I tasted the 2009 Merlot that had a very meaty nose and was full of plum and a bit complex.  The 2010 Empire Reserve Red was bursting with Cabernet Franc mid palate with cranraspberry notes.  The Empire is a blend from the three major NY wine regions and is 33% Cabernet Franc from the Finger Lakes,  33% Merlot from Long Island  and 33% Baco Noir from the Hudson Valley.

I’m looking forward to tasting more wines from Carlo & Dominique.  Hopefully in the Spring I will find my way North again.