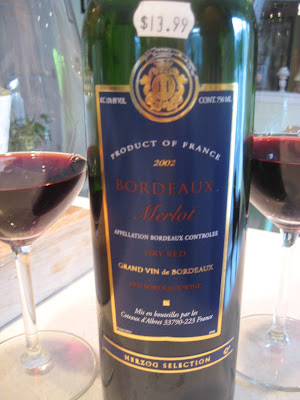 I had great plans for this blog. In the Hudson Valley we have one of the two Kosher wineries in New York State. Kedem Winery which is part of the Royal Wine Corporation makes their home in Marlboro, NY. I pass this winery quite often as I drive up/down Route 9W, but have never stopped in. I called them Monday and the message on the machine said they were open 10a – 5p. So at lunch time I took a ride up and to my disappointment they were closed. Bummer!

In keeping with tradition, I did go to Arlington Wines & Liquor and picked up a bottle from the Herzog Selection – 2002 Bordeaux. The Herzog Family owns Royal Wine Corp and Kedem Winery.

The wine was inexpensively priced at $13.99. This Merlot comes from the Entre-Deux-Mers region of France

On the nose I found it earthy with cherry. This was definitely stainless steel fermented. It had the light stainless steel taste. Not bad, but light. There were flavors of black cherry on the front with dark chocolate on the end.

This was quite an education, as when I was in the wine store, I didn’t realize how many Koser wines there were. This is coming from someone who was brought up in a Jewish household. I thought the only Kosher wine was Manishevitz.