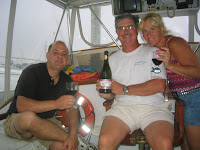 California is where it all began. A trip to Napa in 1997 before a friends wedding, led us into the world of wine. Not knowing much, I stopped to see a travel colleague and he sent us up the Silverado Trail. We came home with what we later learned was some really good wine! It was a good thing we cellared it. (Silver Oak and Staggs Leap)

Because we enjoyed it so, I searched the then young Internet for a wine club to join. I came across a winery called Goosecross in Napa. I didn’t know anything about them, but I liked their label. I joined, I liked, I shared.

What I later learned when my friend from CA was in town in 2000 was that she knew the owners of Goosecross. Having just placed an order, I emailed Colleen and told her of our mutual friend. What we later learned was that her husband David and I both grew up in our young childhood in New Rochelle, NY not to far from one another. Six degrees of seperation.

Now over 10 years later, I am still a member of their wine club. I visit when I’m in the Napa area and I send clients their as well, we exchange Christmas cards, it’s a friendship that’s been created over a label and a desire to join a wine club.

Since the picture above which was taken July 22, 2006 while fishing off the coast of Cape Cod with a bottle of Goosecross Syrah, I opened a 2006 Goosecross Syrah that recently came in my wine club shipment. 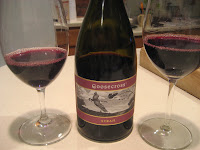 The Syrah had alcohol on the nose at first. But as it opened the vanilla came out. I could taste cherry in the back of my palate. It was oaky and on the finish had earthy spice with some toasted oak. I know this will improve within the next year as the flavors will come forward.

Now that I have a smile on my face from the memories and friendship created over this wine, I look forward to stopping by in July when I’m in the area for the Wine bloggers conference.