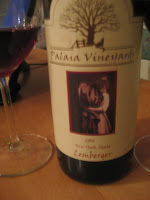 No it’s not a food pairing.  Although I grew up singing the Oscar Mayer B-O-L-O-G-N-A my husband grew up on Lebanon Bologna.  Must be the difference between NY where I was born and raised and Philly where he was raised.

I have one word for Palaia’s 2006 Lemberger – B-O-L-O-G-N-A.  Paul will tell you Lebanon I will tell you Oscar Mayer, either way it’s Bologna.

It doesn’t come across on the nose.  In fact the nose was a little earthy with a hint of spice.  The taste…Bologna and it lingered in the aftertaste as well.  In fact, I am not sure I have had a wine with an aftertaste that lasted so long.