Kalfu means ” blue” as per the language of the Mapuche who are the indigenous inhabitants of Chile. The beautiful blue Pacific Ocean boarders the cool climate of the coastal region where the grapes for this wine was grown.

Produced in Chile by Ventisquero, Kalfu is their new series of wines just released. 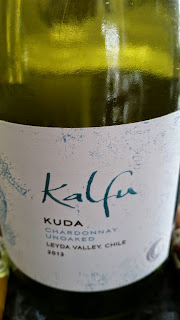 I tasted their 2013 Kalfu Kuda Chardonnay which is soruced from the estate vineyards in the Leyda Valley.  This is an unoaked Chardonnay, of which I really enjoyed.  I feel people who have an aversion to Chardonnay really need to try one unoaked and Kalfu would be one high on my suggestion list.

This 2013 Chardonnay is pale yellow in color.  The nose had serious citrus with honeydew melon, juicy pear and white flowers. The palate was full of pear with hints of tangerine.

This is a nice summer white, not heavy and very refreshing.  The price is $18.99 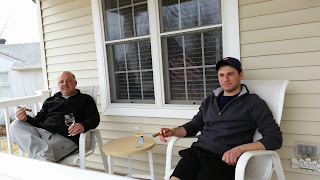 My husband and son paired this Chardonnay with cigars on a Sunday afternoon.