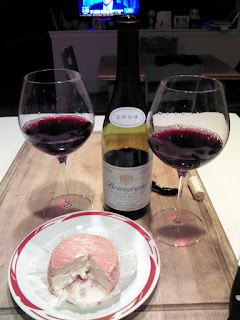 I usually classify cheese by the smell and this one was a bit stinky.  French cheese we paired with French wine.

I got Paul the cheese of the month club for Christmas and this was one of the selections. I was a bit worried at first with the pairing.  I was going to go for a unoaked Chardonnay but Paul pulled out a Pinot Noir. Since this was his gift I went with his pairing.

We’ll begin with the cheese.  Affidelice is a washed-rind cow’s milk cheese from Chablis, France.  Affidelice is a soft cheese with a moist terracotta colored rind and it came in a nice wooden box.  The cheese is washed three times with Chablis and the result is a cheese that is soft and pungent.  If taken out of the fridge and let sit for a few minutes before digging in, it will be a nice spoonable paste. However, in my household, we don’t wait.

The wine that was chosen was a 2009 Bourgogne Pinot Noir by Maurice Ecard from the Meursault region of Cote de’Or.  The wine had aromas of red cherry and strawberry preserves.  Notes of cedar, vanilla and black pepper became prominent as the wine opened.  The palate was filled with cherry and red berry fruit and some dried hers.  It was well balanced with some acidity. It was a very soft and enjoyable wine.

What was very interesting, as the cheese did come to room temperature and it became softer, there were nutty notes that became prevalent.  The nuttiness neutralized the cheese when eaten with the wine.  This was an excellent cheese!  If you happen to see it in the store, I highly recommend it and the wine pairing of course.