Wines of Chile: Carmenere – What I learned, What I Tasted 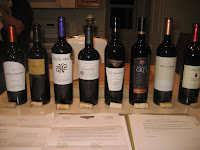 I recently took part in a ‘Wines of Chile‘ Carmenere Wine tasting. (for the blog police, the wines were samples provided by Wines of Chile.)

This wine tasting was executed via the web and we all logged in and got to chat with the 8 winemakers. The tasting was moderated by wine and spirits consultant Michael Green.

The Carmenere grape is known as “the lost grape of Bordeaux.” Originally planted in the Medoc region of Bordeaux until a Phylloxera epidemic wiped it out in the 1870’s.  Before the outbreak, Bordeaux rootstock, Carmenere among them were brought to Chile.  They thought Carmenere was Merlot and planted it accordingly.  It wasn’t until 1993 that they discovered the Merlot was actually Carmenere when renowened viticulturist Professon Jean-Michael Boursiquit of Ensa de Montepellier did a DNA screening on the grape.

I have tasted the Carmenere before and it was very spicy, spiced with black pepper, some stronger than others.  With this particular wine tasting, I found many of the wines to have a green bell pepper taste.  I am unclear if that is the grape, or they harvested it to early, over cropped it, or didn’t leaf pull properly.

Here is a brief critique of what we tasted:

I would like to thank Andrea for including me in the tasting.