It was called Riesling Hour but I think it was more like a virtual Finger Lakes Wine Riesling launch party. The big party that spanned coast to coast was organized by Stephanie Jarvis of the Finger Lakes Wine Alliance. While this is no easy party to organize, it was the climax of three events held throughout September. Big Congratulations to Stephanie for her hard work at this successful program and for including me in the party. The evening of September 28 I spent on twitter with new friends and old ones discussing the 2012 Finger Lakes Riesling.  The 2012 growing season was an interesting one and a very early harvest. Justin Paolicelli, Winemaker & Vineyard Manager of Three Brothers Wineries and Estates describes it as “easy and difficult.  Warm and dry summer lead to a warm fall days and cooling fall nights.  Acids were degrading a lot quicker than the brix were accumulating which is unusual.” That means the winemaker has to work their magic in the cellar.

All across the country we were sharing our thoughts on the media samples that were sent to us.  The wines on my tasting table were 2012 Heron Hill Dry Riesling, 2012 Standing Stone Vineyards Old West Block Riesling and 2012 Thirsty Owl Wine Company Riesling.  I along with many other people joined in on twitter to discuss our wines.  Some were tasting the same, others were tasting Riesling from the many other producers in the Finger Lakes. 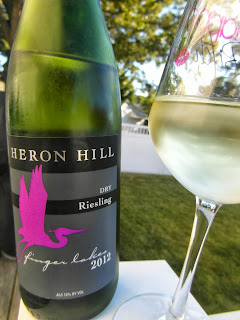 We’ll begin with the 2012 Heron Hill Dry Riesling. The brix clocked in at 21.5 at harvest and was fermented in stainless steel tanks.  Aromas of lemongrass, flint and a hint of pear.  The wine is very nicely balanced with soft acidity.  Flavors of apricot and honey lead the way to a lingering finish with a hint of citrus. This wine is priced at $13.99 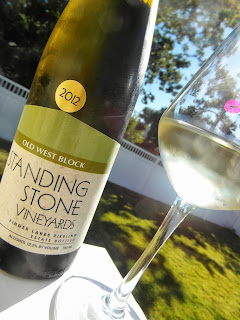 Standing Stone Vineyards 2012 Old West Block Riesling. The grapes for this Riesling clocked in at 22.5 brix and were harvested September 27, 2012. The Old West Block comes from vines that were planted in 1972. The wine was fermented in stainless steel before heading to the bottle.  The minute I opened this bottle I got a wiff of fresh peaches. Wow!  Other aromas in the glass once the peaches settled down were apricot and some pineapple.  One sip found peach and tangerine finishing with some white pepper dancing on my tongue. The wine wasn’t as acidic as I expected from a Riesling from this region but I really enjoyed it and found it quite elegant. 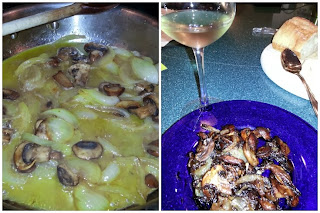 I also used this Riesling to caramelize my onions and mushrooms I was making for dinner. You know the saying, a little wine for the food and a little wine for me.  I tried to match the sweetness and flavors in the Riesling to the veggies.  It worked out great!  They almost didn’t make it to dinner.

There are only 129 cases of the Old West Block Riesling produced.  It sells for $18.99 bottle. 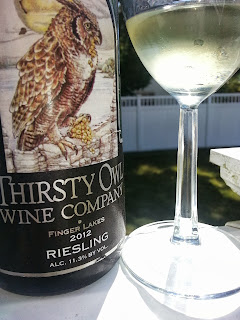 There were many Riesling tasted this evening that ranged from Dry, Medium Dry, to Semi-Sweet, to Ice Wine.  What was the most enjoyable was watching what everyone else was tasting, their comments and the conversation with the wineries and fellow Finger Lakes Wine enthusiasts.

Follow-up Note: On day two I had leftover wine (imagine that) and I made Moroccan Carrot Soup with the Thirsty Owl Riesling and served it with a glass. It was delish!