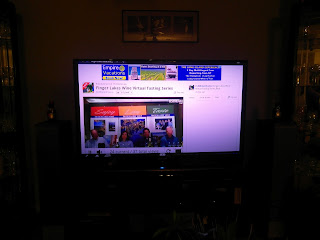 We put the winemakers on the big screen and invited two neighbors over along with blogger Robin Locker Lacey known on twitter as @MyMelange.  On the table were the wines arranged in flight order and the kitchen sink as the spit bucket.

One of the items I found interesting is that Sheldrake Point harvests their Gewurztraminer and places them into a refrigerated truck for cooling.  Why? To assure they are the correct temperature for the cold soak.

We got introduced to Dr. Frank’s Gruner Veltliner.  I have tasted last years vintage and like it quite a bit.  Dr. Frank is in their third vintage of Gruner and have 10 acres planted.  The largest acreage in New York State of this varietal.

In the crowd around the island in the kitchen was a taster who wasn’t fond of Chardonnay.  Being that this was a tasting, you had to taste every wine.  Told to keep an open mind, although hesitant, tasted the Treleaven Chardonnay and remarked “WOW!  I really like this!

This wine tasting had a great outcome.  We turned a non Chardonnay drinker onto a Treleaven Chardonnay, which she liked and sent her home with the rest of the bottle to enjoy. 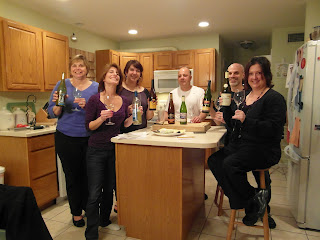