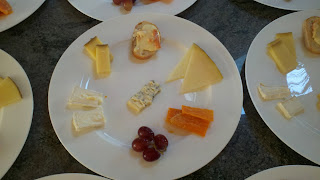 A few months ago I was asked to do a wine & cheese seminar for a group of approximately 30 people from the Mid Hudson Food & Wine Society.  I immediately differed to my friend Wendy Crispell who is wine and cheese pairing expert. She knows wine and cheese like nobody else I know.  Unfortunately Wendy was attending the European Bloggers Conference that weekend so she encouraged me to do the seminar.  I agreed with a little advisement from Wendy and began my quest for 6 good wine and cheese pairings.

Good thing there was some lead time and I had a trip to NYC planned so I pick up and sample the cheese from Murrays in GCT and pair them with some wine. Experimenting was the fun part!   One thing I learned about is the aging of Mimolette Cheese and you have to have the correct aging to go with the Malbec. Mimolette aged 6 months is a lot creamier than when aged for 22 months.  As you can see from the above photo, I chose the 22 month old (orange cheese)

Many cheese produced in Europe are governed by similar AOC rules as wine. In fact Comte St. Antione cheese must pass an evaluation of 12 or more point out of 20 to be able to put Comte St. Antione on the label.  If you purchase the cheese and it’s more yellow it is because it was produced in the summer from cows dining a pasture rich in carotene.

Also right here in the Hudson Valley, Old  Chatham Sheepherding Company has over 1000 East Friesian purebred and cross bred ewes.  This makes them the largest sheep dairy farm in the United States. 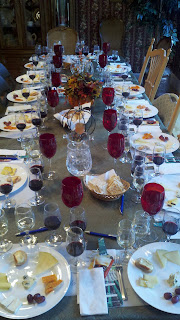 The table was set (there were 2 tables of 15) and I waited for everyone to arrive.  They were a chatty group of people.  Many of them I knew from a ski club I use to belong to and it was great to see them as it’s been a while.

Here were the pairings:

I think the two winning wines of the afternoon (if I had to pick from the comments and re-pours) were the 2011 Trumpeter Chardonnay and the 2006 Finca Loranque Syrah/Tempranillo.
I want to thank the Mid Hudson Food & Wine Society for a wonderful afternoon! 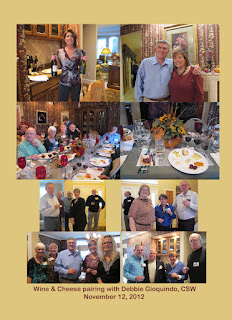