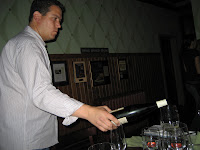 It is all about the food and wine!  After a long day of work, traffic, across the bridge and over the mountain, I was seated at Aroma Thyme Bistro for a Dr Frank wine paring dinner.  I was lucky enough to be seated with Jan McGuire who is the sales representative with Dr. Frank.

If you are not familiar with Dr Konstantin Frank (Dr. Frank for short) he initiated the “Vinifera Revolution in the Finger Lakes Wine Region.  He was a European immigrant who came to the States in 1951 and was a professor of plant sciences and held a Ph.D in viticulture.  He moved to upstate New York and took a job at Cornell Uniersity’s Geneva Experiment Station.    Dr Frank believed that it was the lack of proper rootstock, not the cold weather that was the reason for the failure of Vitis Vinifera in the Finger Lakes.    Long story short in 1962 he founded Vinifera Wine Cellars and earned a reputation for producing great Rieslings and wold class champagnes.  Today they produce wine under three labels, Dr. Konstantin Frank which is all estate grown, the Chateau Frank label produces champagne, and Salmon Run produces wines from grapes sourced from other regions in the Finger Lakes and has a higher residual sugar especially in the whites that the Dr Frank label.  They produce 56,000 cases annually. 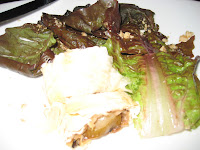 Now on to dinner….we began with a Chateau Frank NY Champagne Blanc de Noir paired with Grilled Pairs, Caved Aged Raw Cheddar Strudel, Praline Walnuts, Baby Red Romaine Walnut Tarragon Vinaigrette.    I am not a big fan of sparkling, I don’t know why, but this Blanc de Noir which was 95% Pinot Noir and 5% Pinot Meunier I really enjoyed.  It is crafted in the traditional method and bottled for 8 years before it is disgorged. It went very well with the pears. 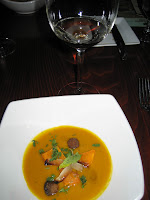 Next on the menu was the Dr. Frank 2009 Dry Riesling paired with curried winter squash, onions and mushrooms. Some of this butternut squash was pureed which gave it almost a soup presentation.  It as in a mild Thai and Indian Madras Curry. The curry was mild but it did have kick.  So…….Marcus brought out the Dr Frank Semi Dry Riesling and we got to do a side, by side comparison.   The Dry Riesling had slight hints of citrus and wet slate leading way to soft apricot and was .9 RS.    It went well with the curry but the semi dry Riesling which was 2.1% RS did cut the spice. 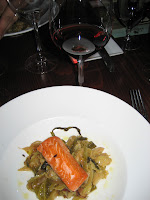 We moved on to the 2007 Pinot Noir.  2007 was a banner year for wine growing in New York State.    The Pinot was paired with Grilled Wild Alaskan Sockeye Salmon, Savoy Cabbage with Truffle, Onion and Bacon.  This salmon was caught with one line.  One line, one hook improves the quality as we were educated by  Marcus.  The Pinot had less the .2% RS hints of red berry and a dry mid palate. 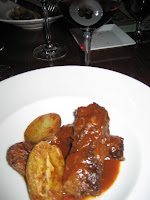 Now that you are full and may or may not be ready for dessert there is another course waiting for you.  Yes, a Slow Braised Local Brisket with Roasted Potatoes served with Dr Frank’s 2008 Cabernet Frank was served.  The pairing was wonderful, but I was full.  I guess it didn’t stop me because I ate most of what had been put in front of me. 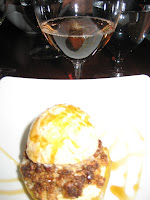 Now for the final course.  What we all save room for…..Local Apple Crisp, Pumpkin Ice Cream paired with Celebre Rose.  The Celebre Rose was made with 100% Pinot Meunier and was 2% RS.  I found the Rose very yeasty on the nose and very effervescent.  I think it’s the bubbles that get me.  The apple and pumpkin ice cream….well what can I say. The apple crisp was actually baked in the half of apple.  I thought that was pretty cleaver.  The pumpkin ice cream was not over powering in flavor and it went very well with both the Celebre Rose and the apple crisp.

Marcus, Jamie and Aroma Thyme Bistro did a wonderful job with the food and wine pairing.  They do offer different wine and food pairings dinners along with beer pairing dinners throughout the year.