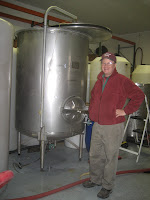 I recently sat down with Jonathan Hull owner/winemaker of Applewood Winery in Warwick, New York. I was very interested in hearing about the history of the Winery and the farm it sits on as well as what brought Jonathan into the world of winemaking. Applewood is the oldest working farm in Orange County and one of the oldest west of the Hudson River.  The history goes back to 1700 when Samuel G. Staats acquired about 5000 acres of land from his friend Governor Bellomont, of the colonial Province of New York. In 1734, 800 acres was purchased by Jacobus Demarest who then in 1863 sold 116 acres to Joseph Roy.  In 1899 the farm passed to James B. Lawrence whose heirs sold it to John E. Predmore in 1921.  In 1949 the farm was purchased by Dr. and Mrs. Donald Hull of Ridgewood New Jersey.   The farm was acquired by his oldest son David who wanted to be a fruit grower.  In 1993 David’s youngest son Jonathan opened the winery in a building along the farm lane.

Here are some questions I asked Jonathan when I sat down with him recently.

What made you decide that you wanted to be in the NY wine industry?
I was living in NYC and had a bottle of Hard Cider made by a lawyer who moved from Brooklyn to .  I knew exactly what I was going to do for the rest of my life from that moment on.
Which of your current wines is your favorite and why?
Stone Fence Hard Cider, I love it’s simple purity.  100% fresh cider.  Why do all these other wineries botch it up by making it with concentrates, water? brandy etc.
What Riesling is your favorite and why?
Herman Weimer, Dry Riesling, wonderful delicate flavors that come from fermenting with wild yeasts.
What has surprised you most about being a member of the wine community?
Even though it is every New Yorkers right to be miserable we all work together and have a lot of fun.

Does anyone else in your family share the passion for winemaking?
My cousin is married to Julian Niccolini the owner of the four seasons who has his own wine label and his daughter is in the Wine business in but I am the only winemaker.
If you weren’t a winemaker what would you be doing?
Something that actually has a potential to make money.