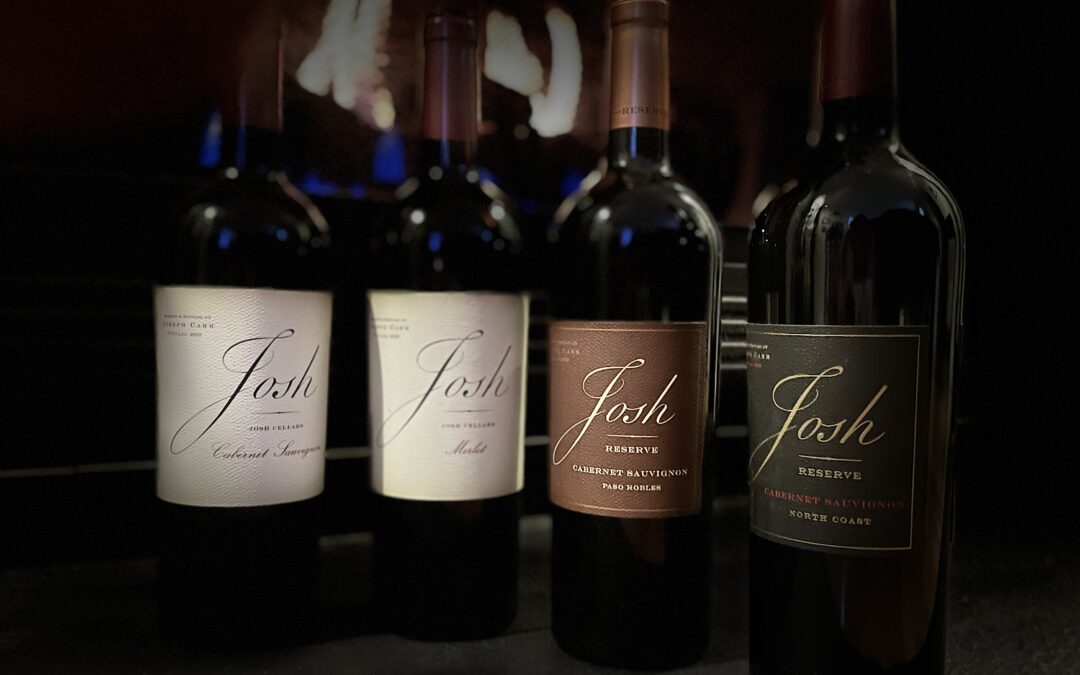 March can be such an unpredictable month with the weather. When that snowstorm or cold rain comes down, you want to cozy up to the fireplace with Josh….Josh Cellars that is.

The man behind Josh is actually Joseph…Joseph Carr. I met Joseph Carr at the New York Wine Expo just when he was beginning with his wines. A couple of wine expos we chatted with him. Unfortunately, he didn’t remember me, but he remembered my husband Paul. We attended a “Winter Dining Series” featuring Joseph Carr Wines at the Culinary Institute of America and when Joseph came to our table to say hi, he looked at Paul and said, “ I know you!” What a great evening that was!

Joseph Carr is from “upstate” New York, actually the Upper Hudson Valley, just east of Albany, NY close to the New York and Massachusetts border. He never lost his New York roots and when we met, he was still living in the area. The business was just himself, his wife and his daughter. He is a negociant. What that means is he partners with vineyards and sources the grapes from them to make the wine.

I’ve seen the Joseph Carr Wines and Josh Cellars evolve. To understand the label Josh, Josh was his father. Born Joseph but called and known as Josh, Joseph named the brand as a tribute to his father. If you ever have the chance to meet Joseph, when he speaks about creating Josh Cellars his eyes and face are just beaming and it shows how much love and admiration he had for his dad. From what I remember, his dad lived just across the New York border in Pittsfield, MA. He was a hard worker, and much of that is instilled in Joseph.

When it’s cold and damp outside and you want to cuddle, pick up a bottle of Josh Cellars. Cuddle with you’re friends and family. They produce two lines of Josh. The original line, Josh Cellars includes the Cabernet Sauvignon that began the brand, now has, in addition, a Merlot, Pinot Noir, Red Blend, Sauvignon Blanc and Rose. Josh Cellars Reserve is fine wines from premium vineyards sourced throughout California’s North Coast and Paso Robles regions. Most recently Josh Cellars Prosecco which they partnered with the Pozzi family to create their first sparkling wine.

A big part of Josh Cellars is what they give back. They contribute to World Central Kitchen founded by Chef Jose Andres. In honor of his father, Josh, who was a volunteer firefighter and served in the US Army, they donate to the National Volunteer Fire Council and Operation Gratitude.

Keep warm with Josh. You never know when the weather is going to change!

2019 Josh Cellars Merlot SRP $16.99 – Hello Merlot, where have you been! Layered aromas of blueberry, violets and vanilla bean lead to a soft clean palate full of blackberries, black cherry and a hint of plum.