Back in May I was doing a tasting event for Happy Bitch Wines at a liquor in Amsterdam NY.  It was just after a F1 tornado swept through the region.  The tasting was a bit slow and I began talking to Dave who I was sharing a table with.  He was pouring spirits.  He began telling me about his buddy Kevin who started 90+ Cellars.  OMG I said, I just received a media sample from them yesterday.  Dave began to tell me all about Kevin’s story, which I must say is brilliant!

Kevin was in the beverage industry and in 2007 resigned to start Latitude Beverage and launched 90+ cellars in 2009. So what’s his story.  In a nutshell, Kevin sought out wineries and winemakers that had a surplus of wine. Main criteria was that their wines had to rate 90+ in Wine Spectator. What you may not realize is that a winery who produces a award winning Chardonnay that scored 90 points or more may only produce 600 cases of it and sell it at $45 a bottle.  Meanwhile they might have another 400 cases worth of juice that they put on the open market to sell. Kevin is one of the people that purchase that juice and bottles it under 90+ Cellars and offers complete anonymity to the supplier. 90+ may sell it for $15.99.  Brilliant isn’t it?  Think if it as the Marshall’s of wine.  Marshall’s – Dress for less, 90+ Cellars – drink for less. 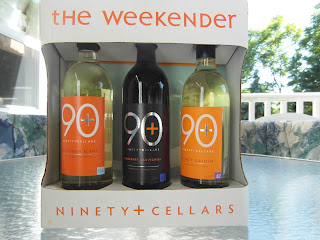 Onto the selections.  The wine was packaged as “The Weekender” complete with three bottles of wine, recipes and a game you can play out of the box.  Points for tossing your corks and caps into the holes. 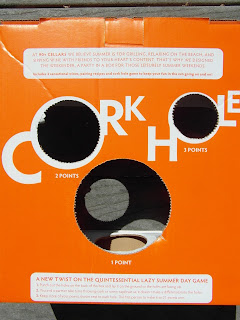 I tasted this wine while I made dinner.  Had the Pinot Grigio while preparing my Asian Lasagna. While it cooked I drank the Sauvignon Blanc and had the Cab for dinner. 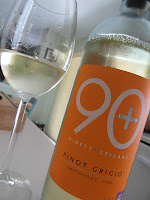 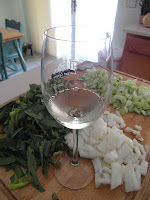 Chopping began while sipping on 90+ 2012 Pinot Grigio from Trentino DOC Italy, Lot 42. Aromas of slate, apple, floral notes and lemon curd filled the glass.  The palate was fresh with soft minerality and flavors of apple and finishes with some lemon zest. This is a very light wine that will drink nice on a hot summer day. SRP $11.99 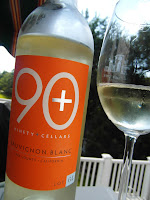 With dinner in the oven for 40 minutes I relaxed with the 2011 Lake County California Sauvignon Blanc, Lot 64.  I personally like my Sauvignon Blancs a little crisper.  This had some notes of grapefruit and cut grass on the nose with some faint hints of fresh herbs.  The palate had flavors of white grapefruit and guava.  This wasn’t my favorite of the three. SRP $11.99

The timer went off and that meant it was time for my Asian Lasagna and the Cabernet Sauvignon from Mendoza. 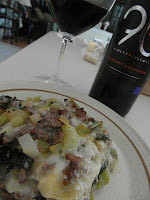 The Cabernet Sauvignon is a Gran Reserve from Mendoza, Argentina, Lot 53.  This wine WOWED me!  It was very complex.  Aromas of cassis, layers of dark berry, black currant and oak filled the glass.  One sip before I ate and I knew this wine was going to be to overpowering for the meal.  My palate was full of black cherry, blackberry and dark berries.  Mid palate showed some sweetness that fades into spice as it finishes.  A very nice Cab indeed! SRP $14.99
Here is the recipe for the Asian Lasagna.  I took it from the May 2013 issue of Every Day with Rachael Ray Magazine.
2 Tbs butter
3 Tbs flour
2 cups whole milk (I used 2% and it was fine)
1 1/2 cups shredded cheddar
Salt & Pepper
3/4 lb ground pork
1lb bok choy stems and greens chopped separately
1 onion chopped
1 small lemon, zested
36 square wonton wrappers
Preheat oven to 400.  In a saucepan, melt 2 tbs butter.  Whisk in flour and cook for 2 minutes. Whisk in milk and bring to a boil, whisking constantly.  Remove from heat and stir in 1 cup of cheddar.  Season.
In a large skillet, melt 1Tsp butter over medium heat.  Add pork and cook until done.  Transfer to plate.  Add bok choy stems and onion.  Cook till tender.  Stir in pork, bok choy leaves and lemon zest.  Season. 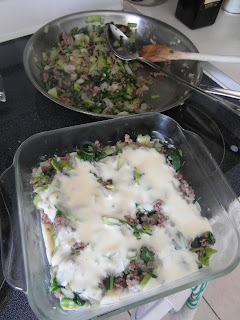 Grease an 8 inch square baking dish.  Spread 1/2 cup sauce on bottom.  Layer the dish with 9 wrappers (dipped in warm water first), one-third meat, 1/2 sauce and another layer of wontons.  Repeat twice and top with remaining sauce
Cover dish with foil and bake for 20 minutes.  Uncover and sprinkle remaining cheddar on top and bake another 20 minutes. 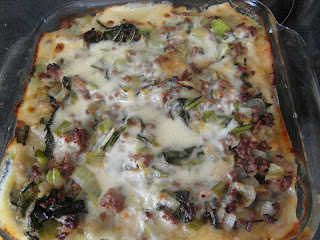 Notes from the Kitchen:
If you don’t like pork a good substitute would be ground chicken or turkey.  I used ground beef and it was fine but I think chicken or turkey would have been better.