This past weekend there was a tragic loss for the Finger Lakes community.  Deb and Dave Whiting owners of Red Newt Winery & Bistro were in a terrible car accident on the New York State Thruway.  This resulted in the passing of 52 year old Deb Whiting.  I’ve met Dave and Deb numerous times on trips to the Finger Lakes.  Words can not describe the loss.

Jim Trezise of the New York Wine & Grape Foundation had a wonderful tribute to Deb & Dave in this weeks Wine Press.  Below you will learn about Deb & Dave, their commitment and the tragic loss that has occurred.  Please note: The Red Newt Bistro will be closed Tuesday, July 5 so friends and family may join in a celebration of Debra’s life from 6-8pm at Red Newt Cellars, 3675 Tichenor Road, Hector, NY. 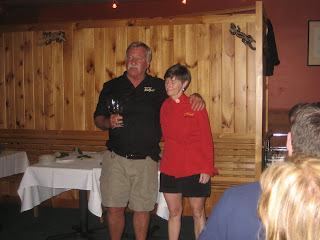 Deb&Dave Whiting have long been leaders in the Finger Lakes wine and food community, as was recognized this spring when they received our “Industry Award” for major contributions in advancing the industry.

Dave&Deb have also been among the most loved people in our community because of their passion for each other, life, and their calling. Deb&Dave were in a terrible car accident Thursday night. Dave is recovering in the hospital. Deb is gone.

It is hard to overstate their many contributions, Dave as a talented and innovative wine-maker, Deb as an incredible self-taught chef and locavore passionista. In fact, her influence in transforming the Finger Lakes food scene is comparable to that of Dr. Konstantin Frank on the wine side. Both combined vision, passion, and commitment to revolutionize an industry and a region.

In 1989, California wine writer Dan Berger, then at the Los Angeles Times, visited the Finger Lakes and wrote a glowing front-page piece about how spectacular the wines were (even then). He also wrote, accurately, that in the Finger Lakes “the culinary excitement is the local Pizza Hut.” Indeed, even for years after that, the Finger Lakes food scene was a disaster until wineries like Wagner, Glenora, and Bully Hill opened their own restaurants.

Red Newt Cellars and Bistro, located high above Seneca Lake’s east side, is a mecca for foodies and wine lovers alike. Dave&Deb always worked closely together to ensure the food-and-wine pairings were as harmonious as their relationship.

I take groups there often–like the judges at the New York Wine & Food Classic–and they come away stunned at the artistry they taste. Each serving is as visually beautiful as it is tasteful, and the creative juxtapositions of sweet and savory tantalize the tastebuds. The menu changes with the seasons, and virtually everything is local, with the sources identified.

Deb&Dave’s commitment has extended well beyond their own business. Dave has hosted dozens of tastings for local winemakers to compare wines and share experience; and collaborated with two other winemakers on a fabulous “Tierce” wine which Dan Berger has named as the best Riesling made in America.

For years, Deb has served as president of Finger Lakes Culinary Bounty, a network of local food producers, processors, distributors, and restaurants. She has helped, and inspired, many other chefs in the region who are now also creating great food. Red Newt has been a popular part of our New York Farm Day each September in Washington, and of many charitable events.

Dave&Deb, or Deb&Dave, is one name for those of us who know them. They were the ideal couple–best friends madly in love, deeply devoted to their kids, always quick to laugh. It will be hard to adjust to a shorter version of the name, though not nearly as hard as the transition Dave now faces.

Yesterday afternoon, after learning of the tragedy, I and some other industry people went to Red Newt to pay our respects and show our support for the staff. One staffer told me that as Dave was being airlifted to the hospital he called Red Newt to tell them to keep it running. The Bistro was closed yesterday, but it’s open today. That’s how Deb would want it.

We offered to wait tables, wash dishes or do anything else needed, and they just may take us up on it. The Finger Lakes family of wine people takes care of its own. Deb’s passing is still a shock that doesn’t seem real. But it’s a vivid reminder that we should greet every sunrise with gratitude that we are alive, and live every day as though it is our last.

Today the Finger Lakes is widely recognized as one of the finest wine country destinations in the world, in large part because the quality of the food has caught up to the wine.

That is the legacy of Deb Whiting.