The Barley’s Angels have taken flight in Poughkeepsie. Yes the Poughkeepsie Chapter has launched and had their first event at Mill House Brewery. 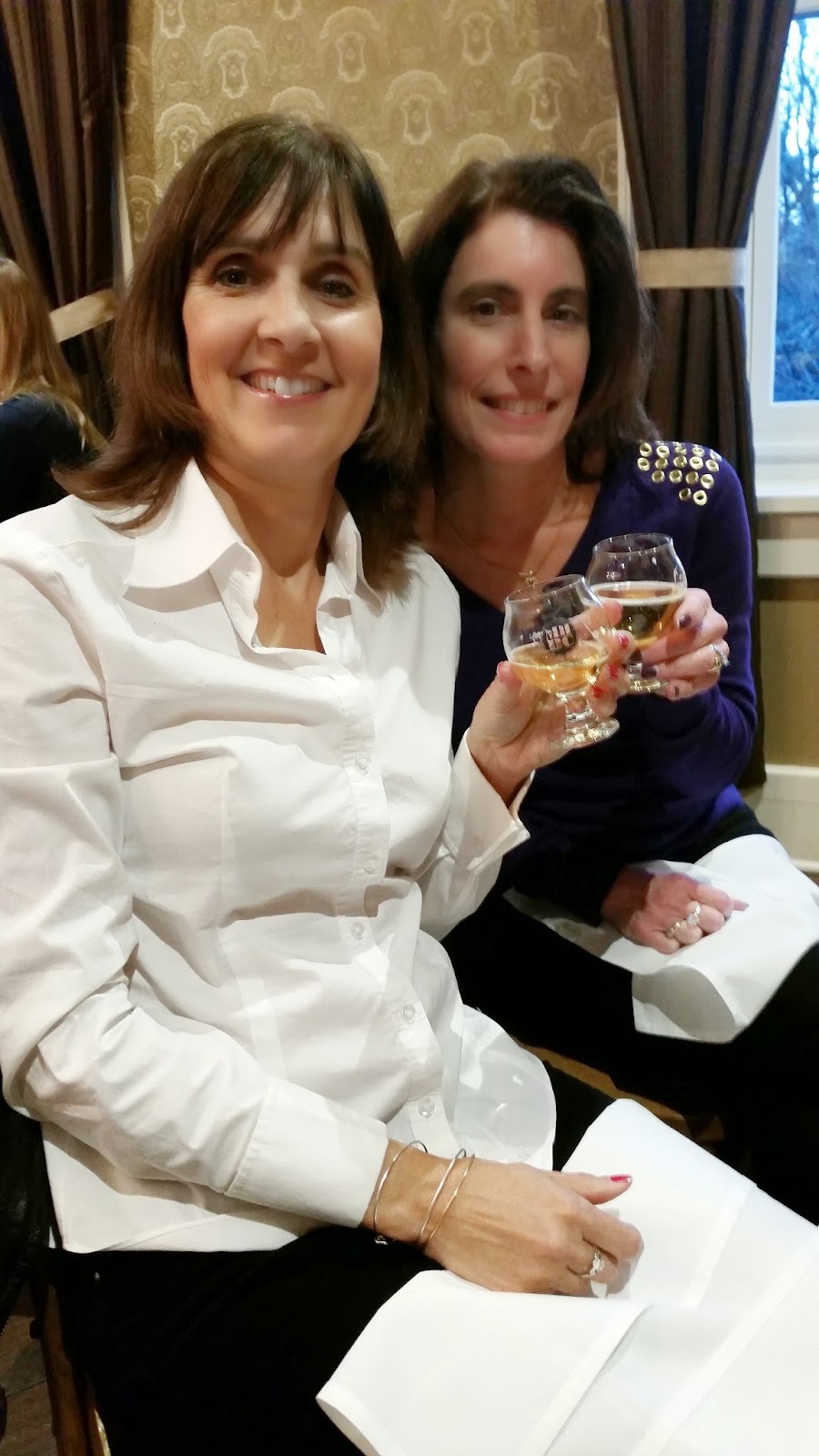 For the record, yes I like a good craft beer! What a great way to learn about beer than with a bunch of women.  I asked my friend and former college roomie Eileen to go with me and she brought her daughter too! Truly a “girls night out.”

Barley’s Angels is a network of chapters for women exploring beer around the world. Each chapter expands the appreciation and understanding of craft beer among event with craft beer professionals. The organization began in Seattle and now has chapters world wide. 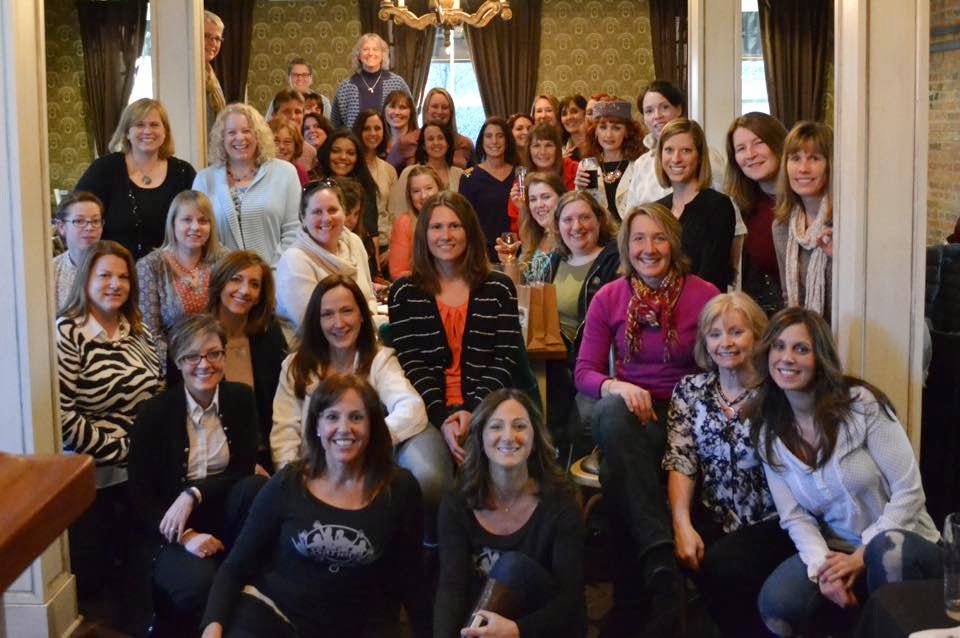 The Hudson Valley Chapter launched Thursday, March 19 with an event at Mill House Brewing Company in Poughkeepsie.  The evening began with a presentation by the Brewmasters Jamie Bishop and Larry Stock, two best friends brewing beer together. 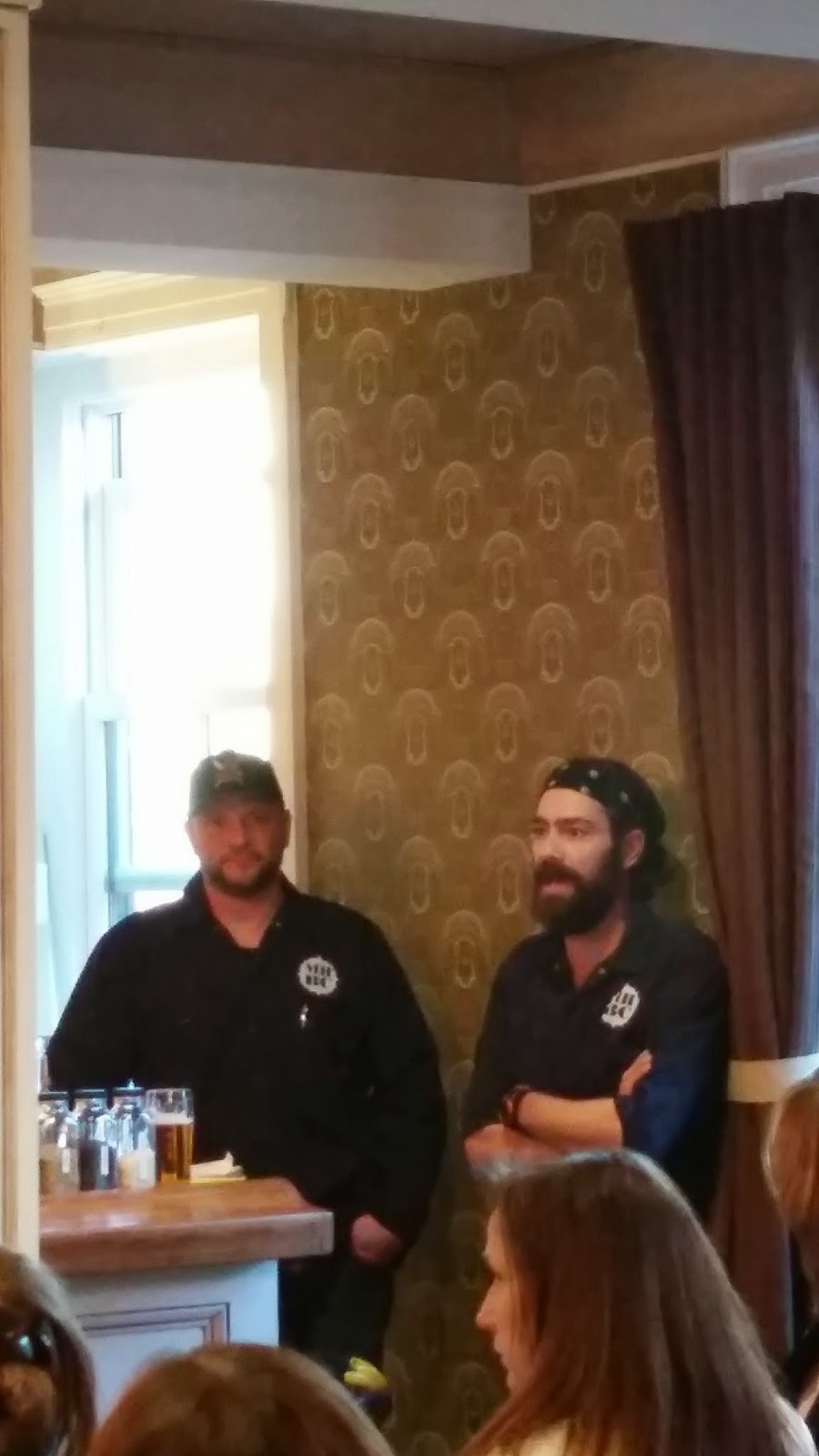 It seems the Hudson Valley is not only famous for wine but beer as well.  Matthew Vassar had one of the largest breweries in America in the 1840’s  producing close to 15,000 barrels of beer. By 1860 they were producing 30,000 barrels.  Yes, in case you were wondering Matthew Vassar established Vassar College. 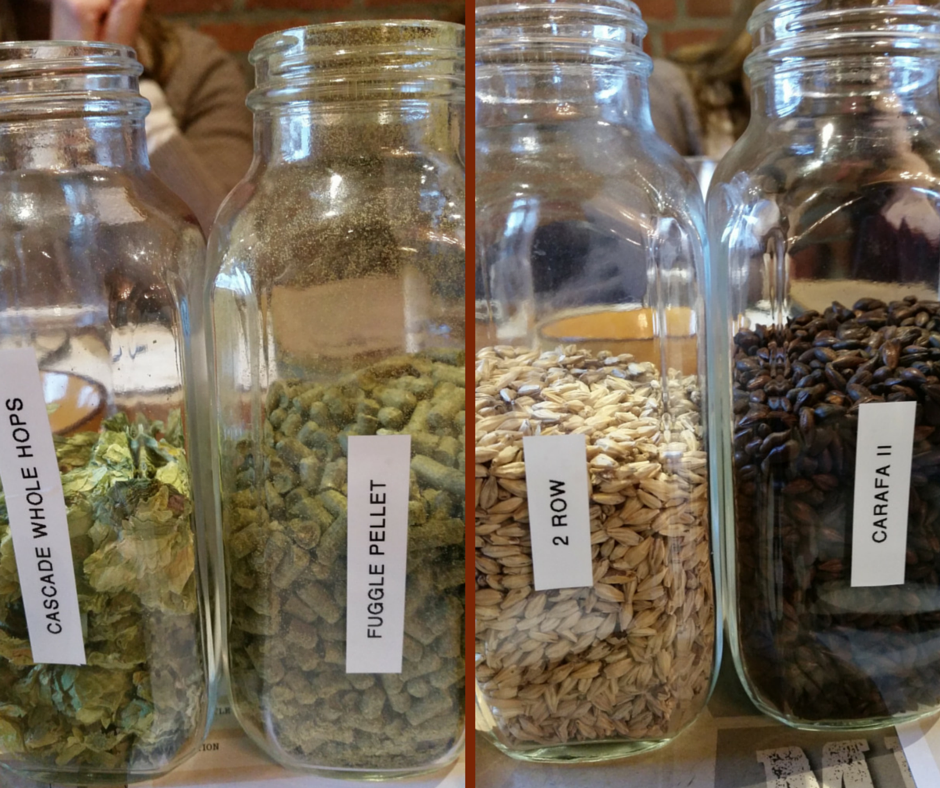 Beer has 3 ingredients, malted barley, hops and yeast.  According to Jamie, “the yeast eats the sugar, pee’s alcohol and burps CO2.” Fermentation usually last 2 weeks and you have a new batch of beer. 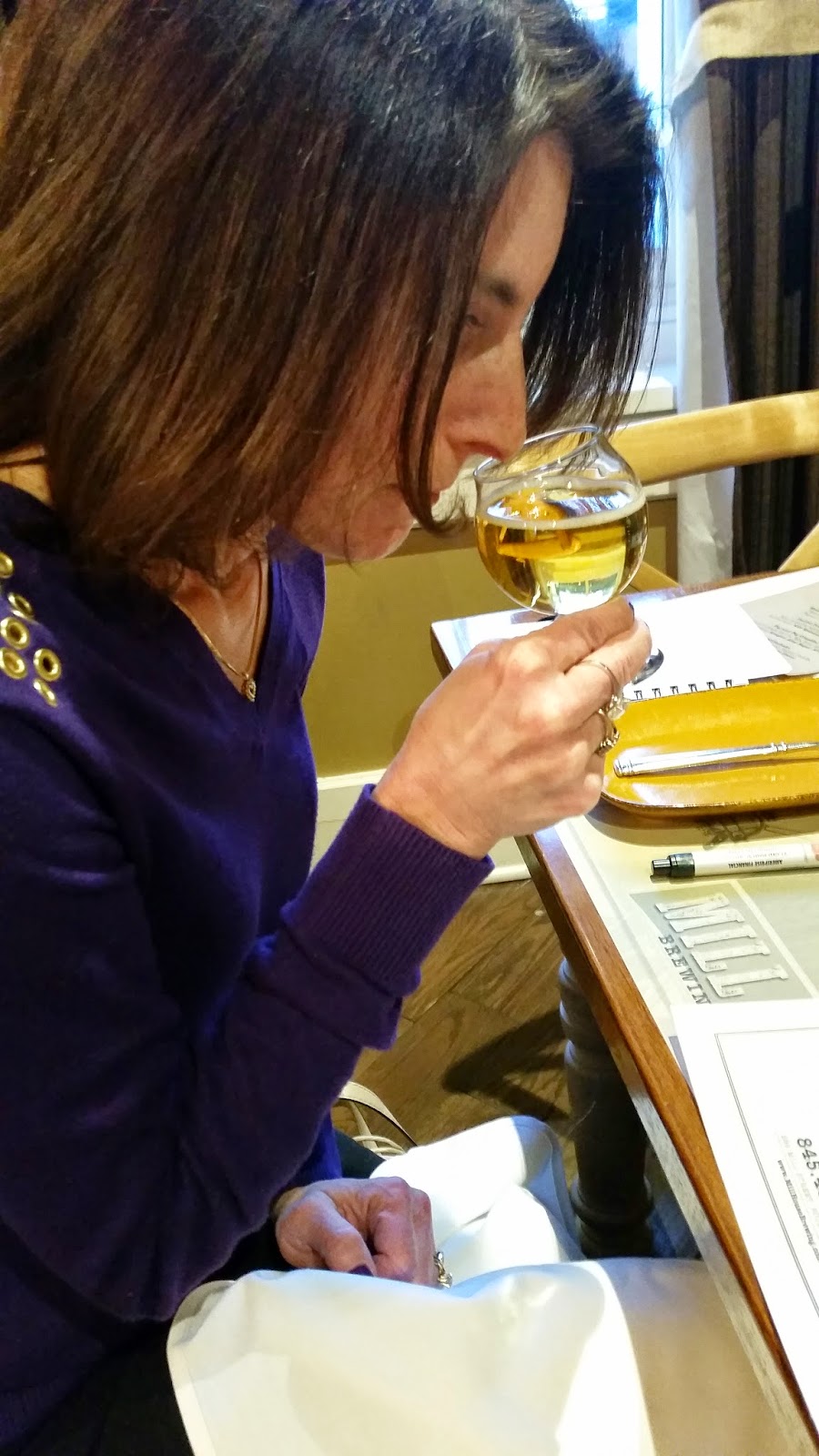 Just like wine, beer has a beginning, middle and an end, a finish.  Jars of yeast, hops and barley were passed around for us to smell.  The toastier the barley the more coffee and chocolate flavors came out.

Now let’s get into our beer pairings.  We tasted 5 beers with various food.  One of the rules of Barley’s Angels is you have to have a guest brew.  So our gust brew at this pairing was Keegan Ales Super Kitty. 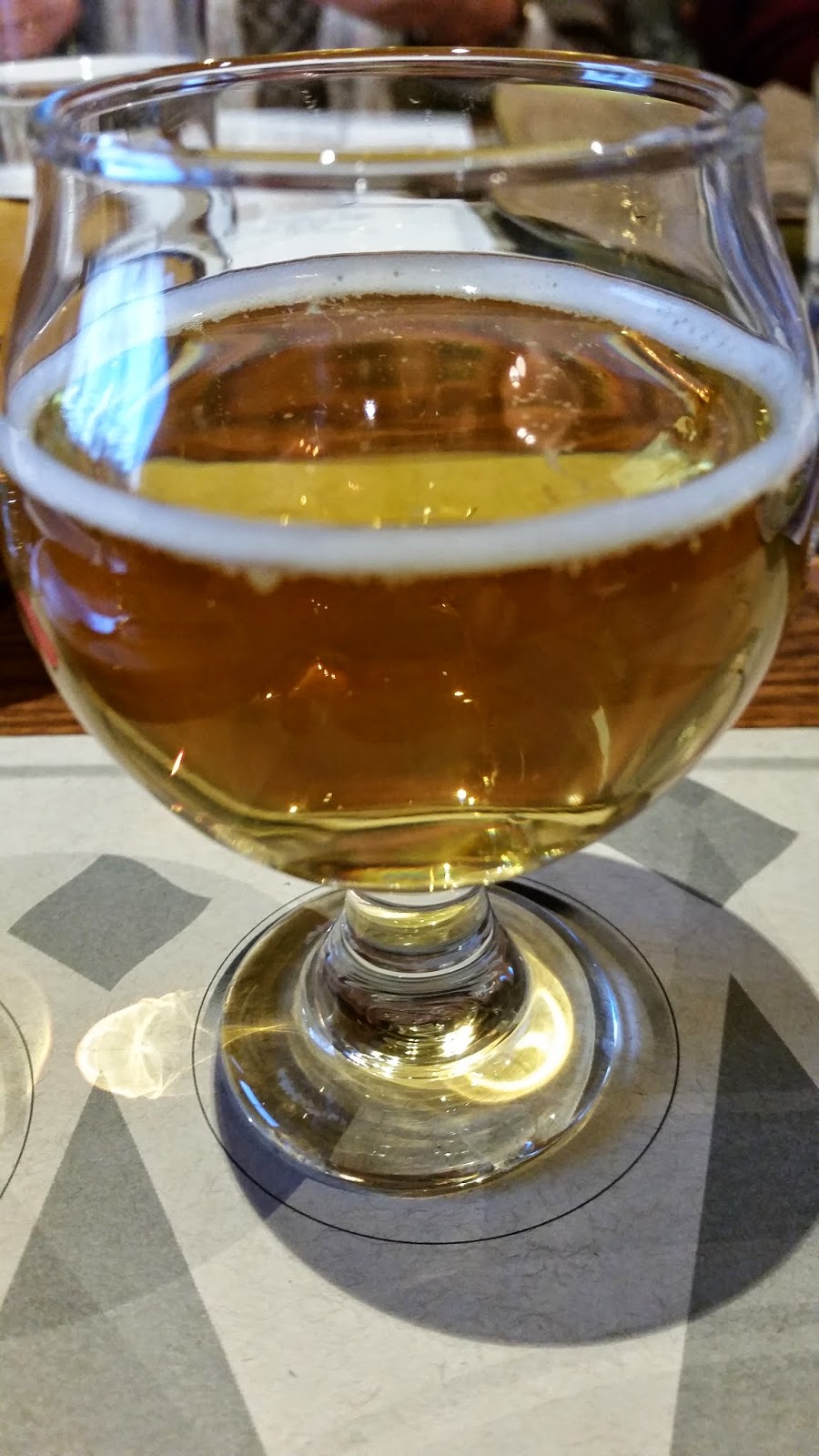 The first pairing was Buffalo Fried Oysters with Mill House’s Kold One Kolsch.  For this paring I can only comment on the beer,  A few years back I had a violent reaction to fried oysters while in New Orleans and haven’t touched them since.  I will tell you they were delicious! However, I was not happy I couldn’t partake in this paring because they looked good. Eileen said the oysters were spicy and it over took the beer.

The beer was a bit light. It did have some characteristics of Champagne, perhaps it was because of it’s weight and the way the bubbles felt in your mouth.  It had a hint of honey on the finish.  As the beer finished in your mouth it went flat. 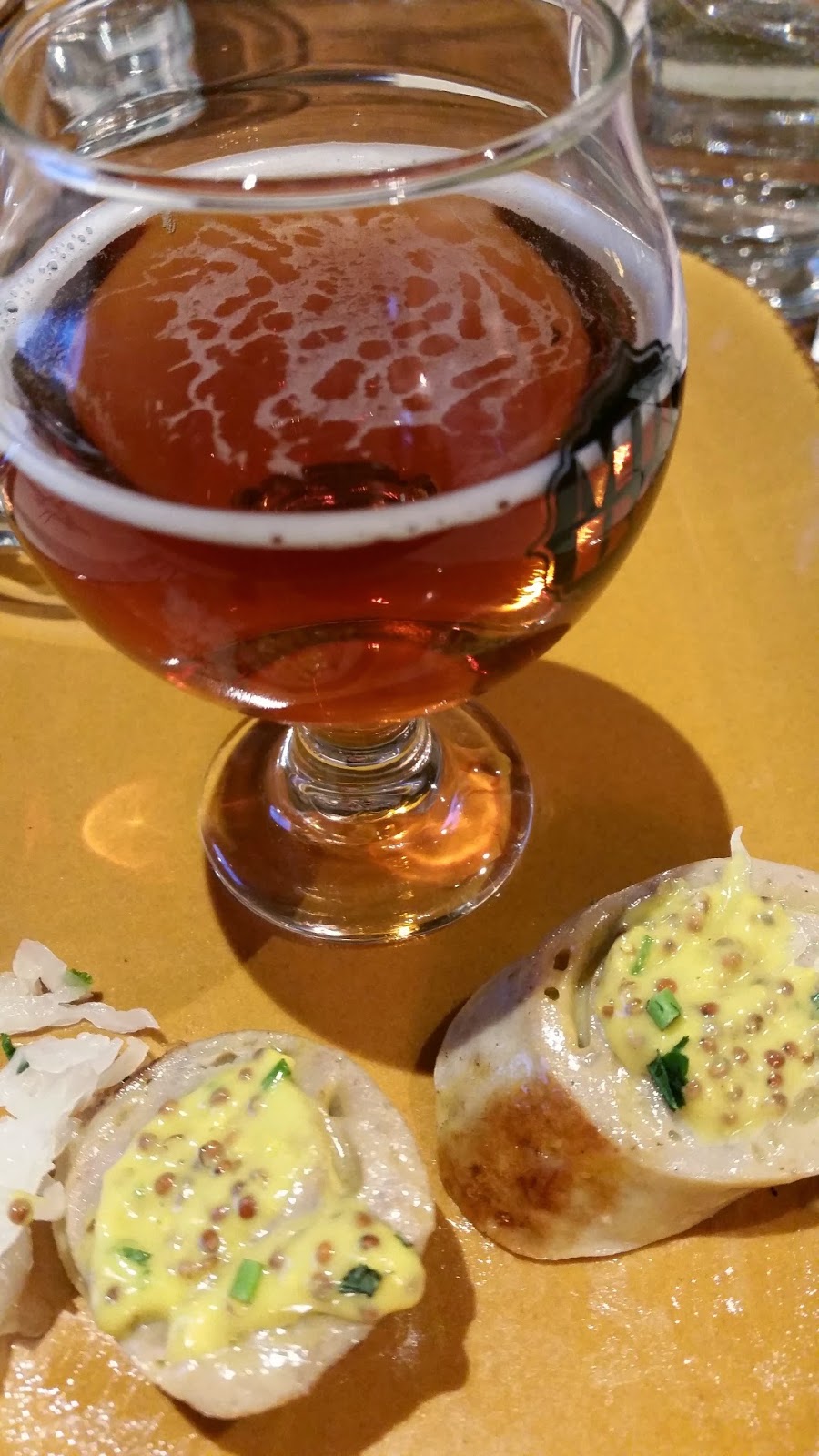 Pairing number 2 was Alpha Amber with Cheddar Bratwurst.  The beer was hoppy with a bit of a sour smell.  The Brats with the stone mustard and sauerkraut and the beer went very well together. 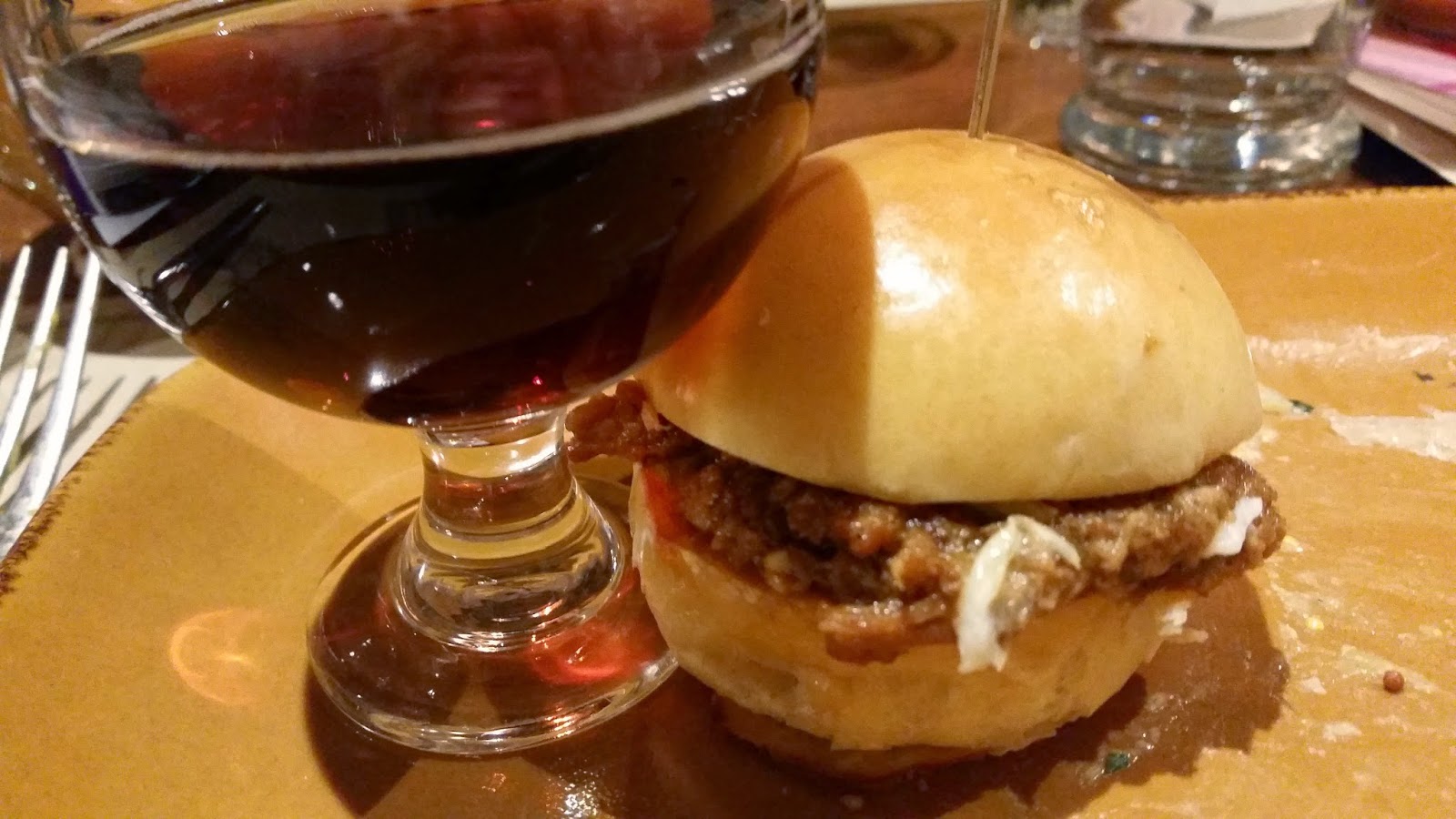 Our tables favorite pairing of the evening…The Pulled Pork Sliders with apple-fennel slaw paired with Kilt Spinner Wee Heavy.  This was a match maid in heaven.  Both blended so well together.   The beer had aromas of mocha, wasn’t to heavy or hoppy with a coffee flavor finish.  The smokiness of the BBQ sauce mellowed out the coffee finish to a soft hint and it all blended well. 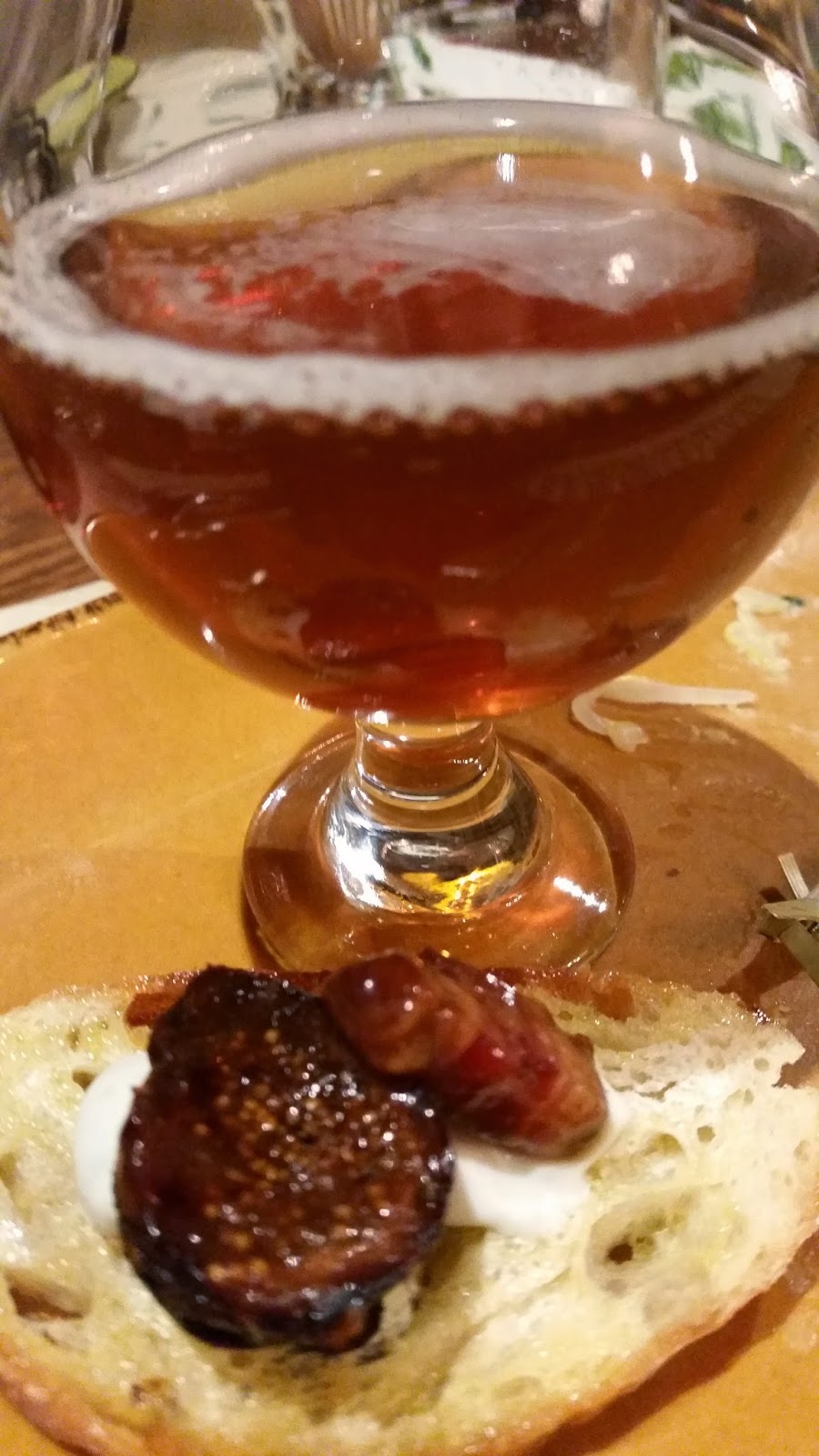 The guest beer Keegan Ales Super Kitty was paired with Fig and Pig Crostini with blue cheese.  The house made bacon was fantasatic!  The aromas coming from the glass was a bit lemony with a sour hoppy smell. The hint of lemon came through on the palate as well.  Paired with the Crostini, it made the finish of the beer very bitter. 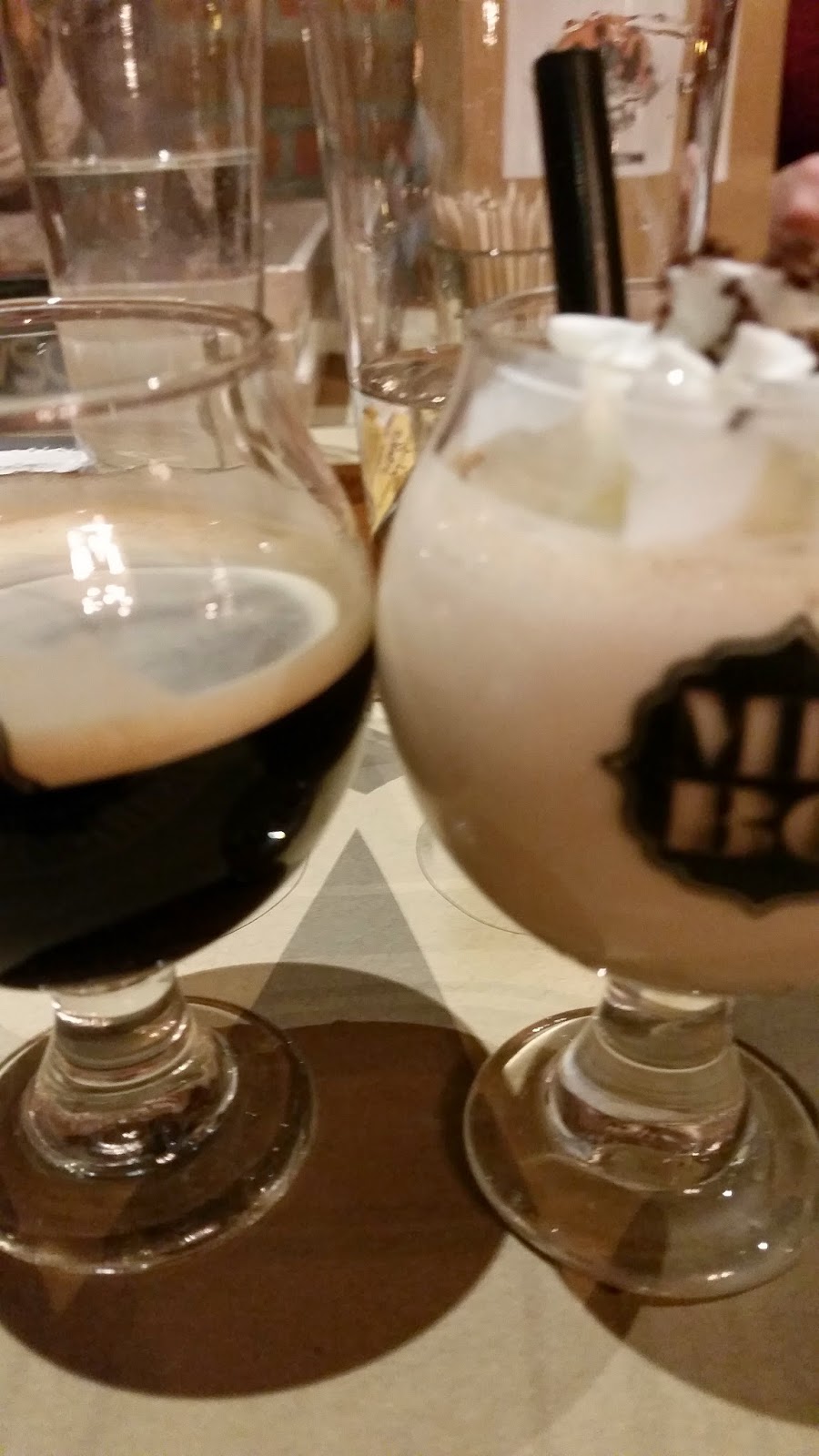 Every pairing must have a dessert!  I wanted this supersized!  A Stout Milkshake served with as well as made with the Velvet Panda Stout.  The Stout had a hint of coffee.  Of course it paired very well with the milkshake. When you drank the milkshake then the Stout it did mellow the coffee flavor of the beer. The milkshake was like a New York Egg Cream made with Stout not seltzer. It was delicious!

The Hudson Valley Barley’s Angels will be having events through out the region at different breweries. You can find them on Facebook https://www.facebook.com/BarleysAngelsHudsonValley and if you want more information you can email barleysangelshv@gmail.com