A stop at Bashakill Vineyards 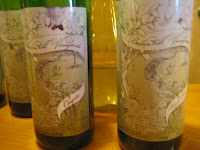 Basha Kill – The area between the Shawangunks and the Catskills, flowing south from Summitville to join the Neversink below the wetlands and onto the Delaware.  In this tiny micro climate we find Bashakill Vineyards

We stopped at BashaKill on our way to Bethel Woods for a concert.  The vineyard is located just as you cross into Sullivan County from Orange County on Route 17. I was at BaskaKill last year and did a series of interviews with Paul Deninno, owner and winemaker.(click here to view them).  It was nice to visit again and see the progress Paul has made.

Unfortunately Paul was not there as he had a wedding to attend, but his brother-in-law did a great job filling in.  They are growing nicely and have increased production from 1000 cases last year to 2000 cases this year. 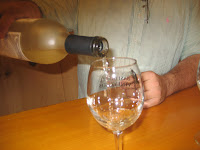 We began the tasting with their 2009 Estate White Tail.  This was made from their first full crop of organically grown Cayuga White grapes and is a sparkling wine.  On the nose I smelled lots of yeast.  I found this slightly sweet and grapey. It retails for $22.

Next we tasted 2009 Barn Owl which is made with Gewurztraminer.  It had nice balance and spice.  Retails for $15.   Then we moved onto the reds.

2009 Dragonfly made from Lemberger grapes.  I have to admit, Lemberger is my least favorite but Paul did a great job with this wine.  I was not overcome by bacon or bologna which is what personally turns me off to this wine. The flavors were mild and had soft tannins.  This wine sells for $14.

Now the Cab Franc – 2009 Black Bear.  This is made from 100% Cabernet Franc and aged for 10 months in medium toast American Oak barrels.  I did get a slight bell pepper on the nose along with some oak and cherry.  The wine had notes of bright cherry, black currant, vanilla and a hint of raspberry. I think this wine along with the next would benefit with aging a few years. This wine sells for $15

The last wine we tasted was the 2009 Coyote.  This is made from 100% Cabernet Sauvignon.  It has a very earthy nose that comes into hints of black cherry.  The wine had flavors of black currant, cherry and black pepper on the finish.  This wine would also benefit with some aging.  It sells for $15 in the tasting room.

If you are driving up or down Route 17, I suggest a stop at BashaKill Vineyards.  Paul has music on the weekends, so pack a picnic and relax.  Also just across the street is the BashaKill Management Area.  Don’t forget to take a walk down there and see some of the wildlife and learn about the BashaKill.